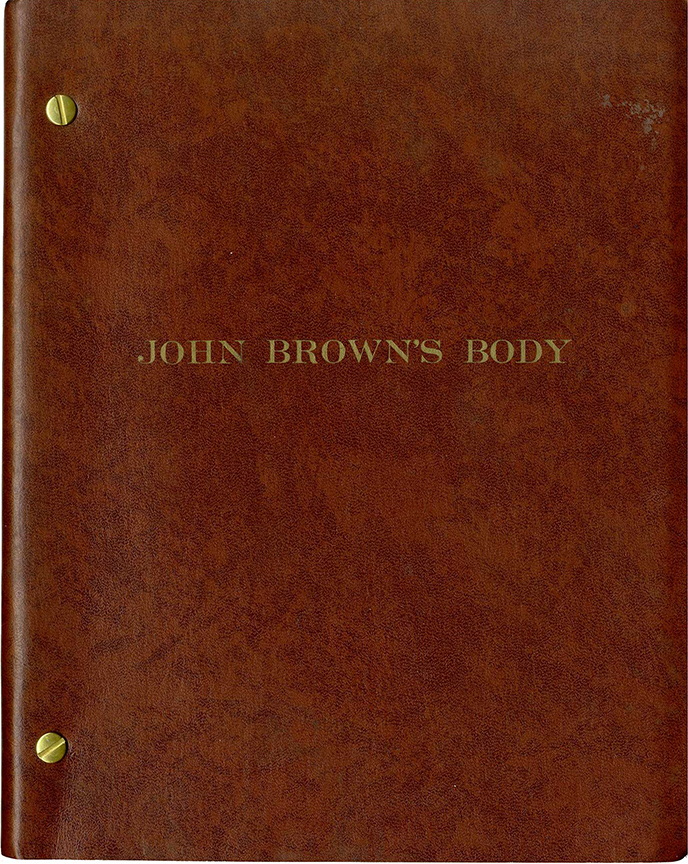 Stephen Vincent Benet (source)  John Houseman (director)  Rock Hudson (actor)  JAMES FITZGERALD PRESENTS JOHN BROWN’S BODY  Vintage original theater script.  Los Angeles: James Fitzgerald Enterprises, [1975]. [1], 91 leaves, printed on rectos only.  Bolt-bound in flexible gilt leathered binder, fine.  Laid in is a 2 pp. TLS, 24 Nov. 1975, from the producer to Colleen Dewhurst’s agent, offering her a role and detailing his plans for the production.  Letter is a little worn along the fore-edges.
The production did happen, a year later, with Fitzgerald producing, John Houseman directing, and a cast of Rock Hudson, Claire Trevor, and Leif Erickson.  The production opened in the spring of 1976 and toured for 20 weeks.  Benet’s epic poem had been the basis of a successful 1953 theatrical production on Broadway and in a subsequent tour.  It was revived in subsequent decades.  Although the text was always taken from Benet’s poem, different productions added and subtracted different portions of it, as well as changing around the staging.  It is interesting to notice that, at this point in his illustrious film career, Rock Hudson chose to be a member of the cast of three.
This script is not listed in OCLC.