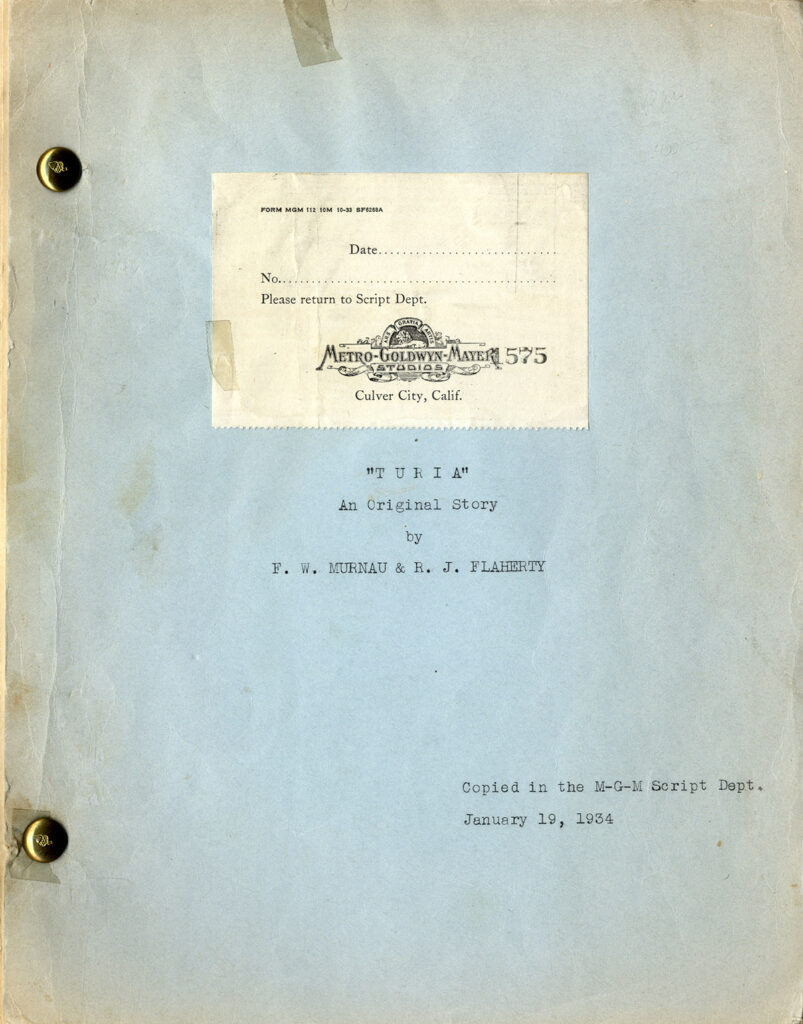 Np, [1930] and Culver City: MGM, 1934. Three vintage original variant scripts (outline, synopsis, and treatment), 11 x 8 1/2″ (28 x 22 cm.), for the 1931 film by F.W. Murnau & Robert J. Flaherty. The original 15-page “story” (outline), offered with the original 31-page “synopsis” and the original 40-page “story” (treatment). All scripts are mimeographs. The outline and synopsis are both file copies done for the MGM Script Department, is stated on the front wrapper as having been run off January 19, 1934 and January 31, 1934 (at a time when MGM was considering doing a remake of the film as a talking film, which would have starred Johnny Weissmuller and Lupe Velez — a project which did not happen.) The treatment, which is undated, is almost certainly from 1929, as Murnau and Flaherty were working together to evolve the script.

TABU is regarded today as the first example of “docufiction,” thus one of the earliest films of its kind. The fourth and final film made by Murnau during his time in the US. Murnau was fascinated in his work with archetypes, and this film — with its story of lovers who have defied tribal mores — certainly fit with his other, earlier works.

“F.W. Murnau was coming off two troubled Fox Studios productions, Four Devils (1928) and City Girl (1930), while Flaherty’s Native American documentary Acoma the Sky City had been shut down. The two directors knew each through Flaherty’s brother David, and Murnau expressed a desire to make a film in Tahiti with Flaherty who had experience with the natives there. Murnau and Flaherty wrote a story called Turia and started their own production company, Flaherty-Murnau Productions. Turia was based on a legend Flaherty had heard while working on W.S. Van Dyke’s White Shadows in the South Seas (1928) and contained many elements which would later evolve into Tabu.

“Murnau visited Tahiti in May 1929 and was joined by Flaherty a month later to scout for locations on the nearby island of Bora Bora. While scouting, they found their leading lady, Anne Chevalier, in a local cocktail bar.

“The production was originally supposed to be financed by a small production company called Colorart. By September, however, Murnau had only received $5,000 of the due money. After a series of telegrams asking for the rest of the money, Murnau got fed up and decided to fund the film himself.

“To cut costs, Murnau sent the Hollywood crew home and trained the natives to work as the film crew. He also scrapped plans to shoot the film in color and changed to black-and-white. The film’s script was rewritten and the title was changed to Tabu to avoid potential legal issues with Colorart. This was the start of a poor working relationship between Flaherty and Murnau. Flaherty disliked the new script, feeling it was overly-plotted and Westernized.”

TABU is split into two chapters: the first called “Paradise,” depicting the lives of two lovers on a South Seas island until they are forced to escape the island when the girl is chosen as a holy maid to the gods; the second chapter, “Paradise Lost”, depicts the couple’s life on a colonized island and how they adapt to and are exploited by Westerners.

The troubled production was originally conceived as a co-directed effort, but, because Murnau found he had difficulty working in tandem with another creative presence, with the exception of the opening scene, the film was directed solely by Murnau. Murnau died in a hospital after an automobile accident on March 11, 1931, a week before the premiere of Tabu in New York. Tabu is now considered one of the last, and one of the greatest, of all silent films. It is fascinating to be able to study how Murnau and Flaherty developed their ideas for this legendary film.

Murnau was a gay man, and one of the preeminent visionary directors of the silent era, who, in the 1920s, directed a series of groundbreaking Weimar-era films, including the early classic vampire film NOSFERATU (1922), as well as DER LETZTE MANN [THE LAST LAUGH] (1925) and FAUST (1927). His films show a recurring interest in marginalized characters. Benshoff and Griffin, p. 43.

— Treatment: Blue wrappers, noted as “Treatment” on the front wrapper, with credits for story writers Murnau and Flaherty. 39 leaves (with one combined page, so numbered pages culminate in page 40), mimeograph. Collation: 1-24, “25-26”, 27-40. Pages and wrapper NEAR FINE, wrapper with evidence of a brief erasure just below, “TREATMENT BY,” bound with two gold brads.