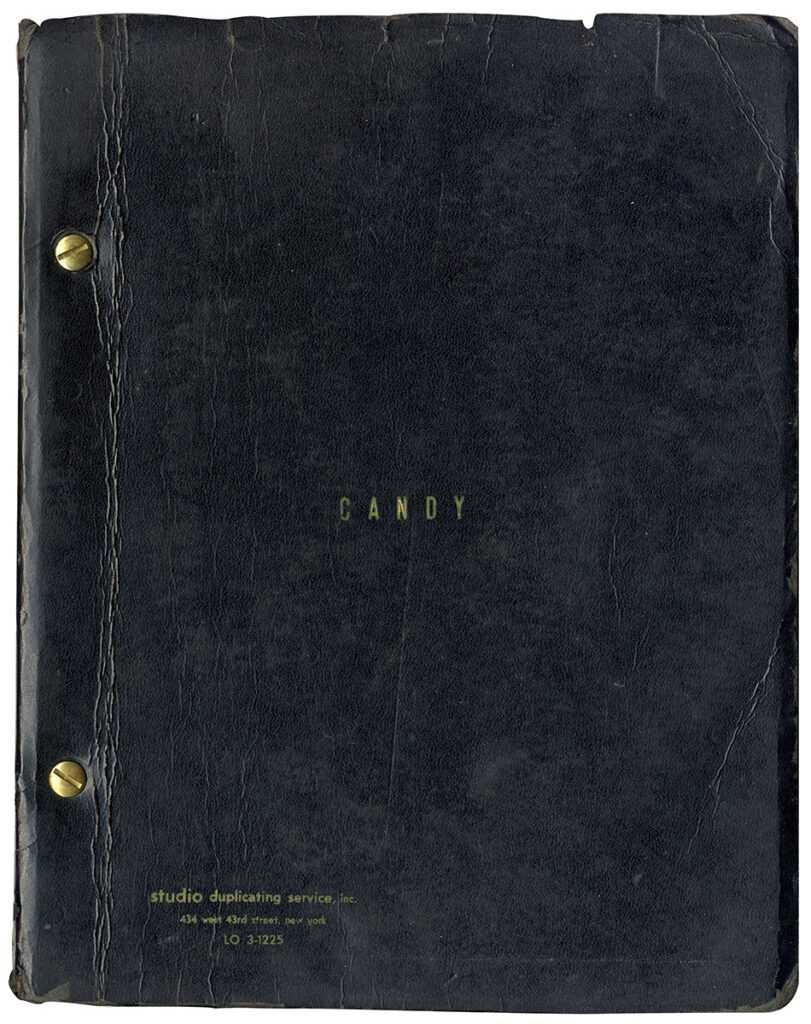 This script belonged to Frank Perry, with his name in red holograph ink on the title page. Perry considered making the film, but it was ultimately directed by Christian Marquand.

In her memoir, Trippin’ with Terry Southern: What I Think I Remember, Gail Gerber details at some length the tangle of legal problems over the publication of Candy in the US and abroad. Publication was poorly controlled, resulting in numerous pirated editions and lawsuits involving Maurice Girodias (Olympia Press), Putnam, and small US paperback publishers such as Lancer, Greenleaf, and Brandon House. She notes, “Despite the popularity of the novel, Hollywood was always leery about getting involved with properties that have ‘clouded title,’ so it was no surprise that Frank Perry gave up on the idea of directing the film version of ‘Candy,’ much to Terry’s disappointment.” This draft is credited solely to Southern, though Buck Henry was ultimately given full credit for the adaptation from the novel by Southern and Mason Hoffenberg.

The book CANDY was Terry Southern and Mason Hoffenberg’s bestselling pornography satire published pseudonymously by Olympia Press in 1958. In many ways it was an update of Voltaire’s 1759 novel, CANDIDE. (Innocent encounters various corrupt representatives of the real world. Loses innocence.) At the time of its publication, it was considered unfilmable due to its sexual explicitness.

By the late 1960s, the Texas-born novelist, journalist, and short story writer, Terry Southern (1924-1995), had also achieved phenomenal success as a screenwriter whose credits included DR. STRANGELOVE: OR HOW I LEARNED TO STOP WORRYING AND LOVE THE BOMB (1964), THE LOVED ONE (1965), THE CINCINATTI KID (1966), and BARBARELLA (1968). Southern’s First Draft adaptation of CANDY was commissioned by American director Frank Perry (DAVID AND LISA, THE SWIMMER) who eventually had to abandon the project due to rights issues. The movie was ultimately directed as a French/Italian/American co-production by actor Christian Marquand with a screenplay solely credited to Buck Henry (THE GRADUATE).

As one might suspect, the movie CANDY varies significantly from Southern’s original screenplay, though some of Southern’s material was retained. In Southern’s screenplay, his protagonist, Candy Christian is a “fresh, innocent, beautiful” 17-year-old college sophomore whose thoughts we occasionally hear in voiceover (there is no voiceover in the Marquand/Henry movie). Southern’s screenplay opens with Candy listening to a lecture by Professor Mephesto, a “German, Russian, Hungarian” type.

The Marquand/Henry movie opens quite differently with a psychedelic montage of planets and stars. We then see Candy daydreaming in a social studies class taught by her father (John Astin), followed by a brief father/daughter scene in the school’s hallway. Only then are we introduced to illustrious guest lecturer, MacPhisto (Richard Burton) — no longer Mephesto as in Southern’s screenplay and no longer a German/Russian/Hungarian philosophy professor, but a Welsh poet, a caricature of Dylan Thomas, to whom Candy and the other female students respond like rock groupies.

And so it goes. Buck Henry’s screenplay for the Christian Marquand movie is radically different from the screenplay Terry Southern wrote for Frank Perry, written in a pastiche of Southern’s style, but with characters, situations, and dialogue that were entirely Buck Henry’s inventions. The whole psychedelic aspect of the film can be attributed to Marquand and Henry. The Terry Southern First Draft screenplay is a separate and distinct work that would have resulted in a very different film.

The Southern novel and screenplay are structured as a series of encounters between Candy and the various bizarre characters she meets on her way to self-realization and enlightenment. His Candy is innocent, but not stupid, and many of the sexual encounters in the story are initiated by Candy herself, arising from a misguided sense of altruism. The chief characters in the Southern screenplay in order of the sequences they appear in are as follows:

– EMMANUEL: Their Mexican gardener. Doesn’t speak English. In Southern’s screenplay, she seduces him; in the Marquand/Henry movie, he rapes her.

– DR. CALVIN DUNLAP: Stuffy head of the hospital. Described by Southern as a Charles Laughton type. Played by John Huston in the movie.

– HUMPBACK: So mentally defective and wretched in Southern’s book and screenplay that Candy has sex with him out of pity. In the movie, where he is billed as “Hunchback Juggler”, he is a master criminal with uncanny acrobatic abilities played by Charles Aznavour.

– GRINDLE: A self-styled guru. In the Marquand/Henry movie where he is played by Marlon Brando, he is renamed Grindl, he is characterized as East Indian and lives inside a refrigerator truck.

– HOLY MAN: A mysterious silent figure, his face covered in clay, whom Candy meets in Calcutta (Los Angeles in the movie) in the story’s finale. Caught in an earthquake and thunderstorm which shatters his temple and somehow leads them to sex, Candy recognizes him as the rain washes the clay off his face, and utters the book and screenplay’s famous last line, “Good grief, it’s Daddy!” Well-known as that line is, uttered throughout Southern’s book and screenplay as Candy’s catchphrase, the Marquand/Henry movie mysteriously omits it. (She simply says, “It’s Daddy!’)

Among the characters added to the story in the Marquand/Henry movie are a Dr. Strangelove-like General played by Walter Matthau, a trio of Mexican biker women, a Mafia boss, and a fanatical Italian film director. In the movie’s psychedelic coda, Candy wanders across a field — surrounded by flapping banners and hippies playing music — where she revisits many of the characters she met throughout the film before finally returning to outer space.

Aficionados of Terry Southern’s literary work would certainly prefer Southern’s original First Draft screenplay to Buck Henry’s occasionally clever imitation of his style. The characteristic Terry Southern tone and voice are present throughout. Southern’s screenplays for DR. STRANGELOVE, THE LOVED ONE, THE CINCINNATI KID and BARBARELLA were all adapted from works by others. CANDY was Southern’s first attempt to adapt one of his own works to the screen, and it’s a pity the Southern version was never filmed. Fortunately, Southern’s second attempt to adapt one of his own novels, THE MAGIC CHRISTIAN, was filmed in 1970 by director Joseph McGrath with far more satisfying results.