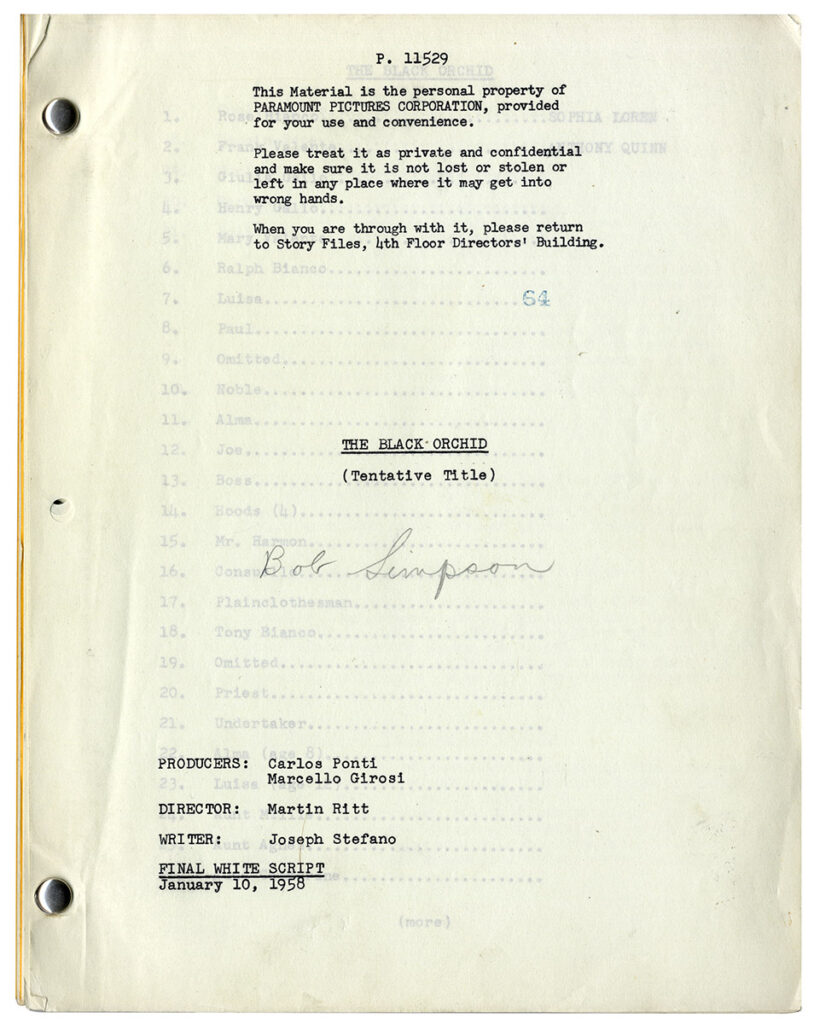 Ghosts, aliens, and psychological horror were the specialties of Joseph Stefano (1922–2006), best known for authoring the screenplay of Alfred Hitchcock’s PSYCHO (1960), and as the producer/showrunner/chief writer of the classic gothic science fiction television series THE OUTER LIMITS (1963-1964). But Stefano had another side, a penchant for realistic drama that reflected his Italian-American background. We see this in one of his last screenplays, TWO BITS (James Foley, 1995) starring Al Pacino as an immigrant grandfather, and in his first original screenplay, THE BLACK ORCHID (Martin Ritt, 1959).

The title THE BLACK ORCHID refers to Rose Bianco, the character played by Sophia Loren in the movie, a gangster’s widow who earns the nickname “Black Orchid” because she is beautiful and because she is never seen wearing anything but black mourning clothes. She works alone in her urban apartment making artificial flowers. (Stefano’s original title for the screenplay was “The Flower Maker.”)

Rose is sweetly courted by the widower Frank Valente, a genial businessman played by Anthony Quinn. She has a young son Ralphie who has been sentenced to a work farm for a minor crime. Frank has an adult daughter Mary who takes care of him. There are two more characters who cast their shadows over Rose and Frank, but appear on-screen only briefly in flashback or not at all. One is Rose’s late husband, Tony, who became a gangster mainly to provide Rose with the material things she desired. The other is Frank’s late wife, a mentally disturbed woman who spent the last ten years of her life isolated in her room. (We may think of Stefano’s PSYCHO screenplay with its principal male character Norman Bates dominated by the memory of his dead mother.)

Stefano’s screenplay is a fine example of understated American realism, reminiscent of Paddy Chayefsky screenplays like MARTY and MIDDLE OF THE NIGHT. The film’s director, Martin Ritt, had a continuing interest in the lives of ordinary people of various ethnic types, black people in EDGE OF THE CITY and SOUNDER, white southerners in CONRACK and NORMA RAE, New York Jews in THE FRONT, and Italian-Americans here. Stefano’s BLACK ORCHID screenplay emphasizes a trio of Italian-American obsessions — the Family, the Church, and Food.

There are a few differences between Stefano’s screenplay and the completed film. Notably, a flashback at the beginning to Tony and Rose’s wedding and the gathering of friends and neighbors after the wedding is much more elaborate in the screenplay — crammed with behavioral detail — than it is in the movie. One can easily imagine what a Coppola or a Scorsese might have done with a scene like this. The other differences are comparatively minor. The director doesn’t always follow the screenwriter’s detailed visual descriptions of how a scene should be shot, and there is the usual sort of trimming and polishing of dialogue that one expects in the transition from script to screen.

The screenplay for the most part is a gentle love story. Though Rose is wracked with the guilt she feels over her husband Tony’s death — it was her desire for the American “good life” that pushed him into crime — she finds it impossible to resist Frank’s charm, amiability, humor, and genuine affection for her and her son. The story turns momentarily dark in the script’s final act when Frank’s daughter Mary’s fear of losing her father to Rose causes her to retreat into near-madness, locking herself in her room as her mother had before her. But things miraculously work out.

Stefano’s distinctive flair for dialogue places him in the company of some of America’s finest playwrights and screenwriters. For example:

FRANK
Working at night? Even God doesn’t work at night.

ROSE
To make a living, people do a lot of things God don’t do.

Re the death of Rose’s gangster husband:

GIULIA
That insurance company shoulda gave you the money! Natural or unnatural, dyin’ is dyin’.

Or what Frank says about the tuxedo he is having made for his wedding to Rose:

FRANK
I’ll never use it again, but at my age a man should have a tux hangin’ in his closet. The moths have more respect for him.

Joseph Stefano’s THE BLACK ORCHID is remarkable for a first original screenplay, accurately observed, psychologically persuasive, and filled with warmth, humanity, and the writer’s love for his characters.