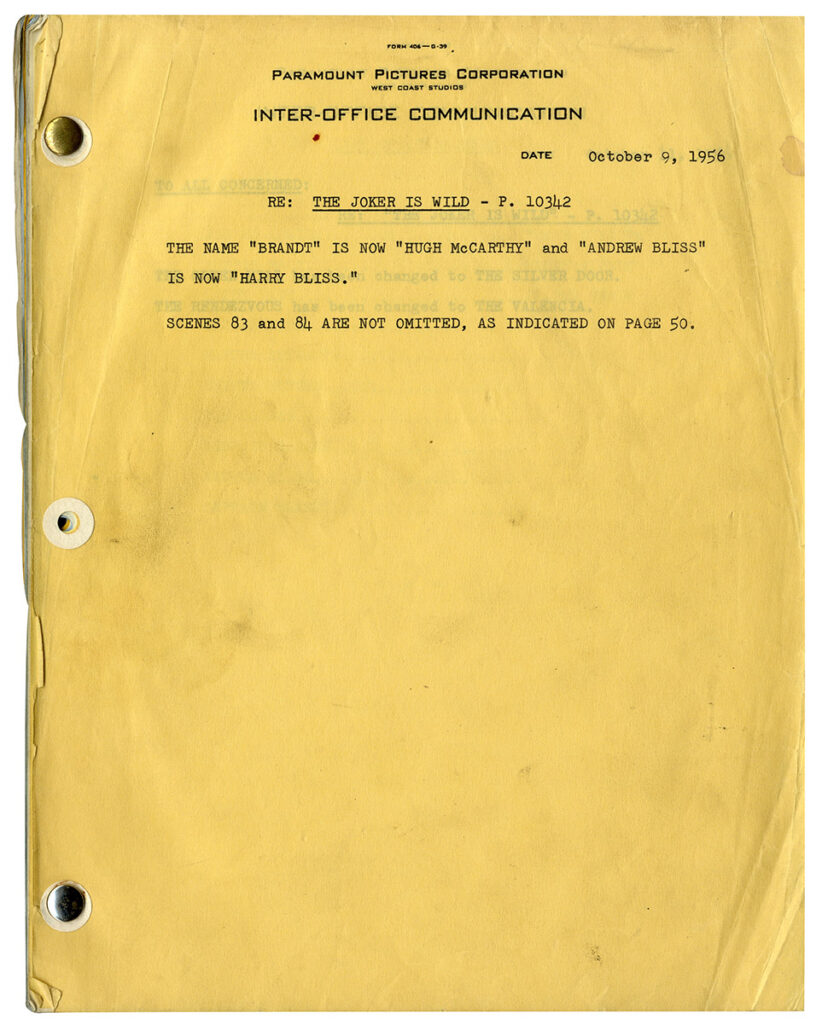 The gangster musical — a serious gangster drama with songs — was not a frequently produced Hollywood genre, but Hungarian-born director Charles Vidor had already made one very good one, LOVE ME OR LEAVE ME (1955) with James Cagney and Doris Day, before he partnered with actor/singer Frank Sinatra to make THE JOKER IS WILD (1956), a gangster musical biopic which tells the story of real-life nightclub entertainer Joe E. Lewis. (Sinatra and Vidor’s two producing partners were Lewis, himself, and Art Cohn, who wrote the biography of Lewis on which the movie is based). Charles Vidor’s best-remembered film, GILDA (1946), was another serious drama with songs, specifically Rita Hayworth performing the classic “Put the Blame on Mame.”

THE JOKER IS WILD’s screenplay was authored by Oscar Saul, best known for his screen adaptation of Tennessee Williams’ A STREETCAR NAMED DESIRE (Elia Kazan, 1951). Prior to that, his numerous movie credits included ROAD HOUSE (Jean Negulesco, 1948), a film noir with songs, and THE DARK PAST (Rudolph Maté, ’48).

Joe E. Lewis’s story begins in a 1929 Chicago nightclub where Joe is working as a singer. When he agrees to take a job at a nightclub owned by a rival mobster, the first club owner has his thugs assault him by slashing his face and throat, effectively ending his singing career, at least for a while. All of this occurs within the screenplay’s first 29 pages.

The completed film tracks Saul’s screenplay quite closely, with some rewriting toward the end. A couple of brief scenes not involving Joe appear to have been deleted during the editing process. After the throat-cutting incident, Joe disappears. Eight years later he is discovered by his best friend and former piano accompanist, Austin (Eddie Albert), working as a clown-nose wearing second banana in a New York City burlesque theater. Austin invites him to a charity benefit hosted by Sophie Tucker where he is forced to go on-stage and, too embarrassed to sing a complete song, he starts to tell jokes. The audience loves him, which leads to a new career as a nightclub entertainer specializing in comedy. In the meantime, there are relationships which start off well but go sour, first a society woman (Jeanne Crain) that falls apart due to Joe’s fear of commitment, then a marriage to a pretty chorus girl (Mitzi Gaynor). Eventually Joe manages to drive away both his wife and his best friend with his chronic alcoholism and gambling. The nightclub atmosphere and the character’s self-destructiveness oddly foreshadows Scorsese’s RAGING BULL.

Frank Sinatra, an auteur in his own right, co-produced THE JOKER IS WILD as a vehicle for his acting and singing talents shortly after his big comeback role in FROM HERE TO ETERNITY (Fred Zinnemann, 1953), which earned him an Oscar. Other outstanding films he made during this peak period included THE MAN WITH THE GOLDEN ARM (Otto Preminger, 1955), GUYS AND DOLLS (Joseph L. Mankiewicz, 1955), HIGH SOCIETY (Charles Walters, 1956), and PAL JOEY (George Sidney, 1957). Anti-heroes with self-destructive habits like heroin addiction (MAN WITH THE GOLDEN ARM), drinking (THE JOKER IS WILD), or gambling (A HOLE IN THE HEAD) were a Sinatra specialty during this era.

THE JOKER IS WILD gives Sinatra fans what they came to see, namely, Frank being Frank, telling jokes and singing songs, including the featured number “All the Way” which was not only a hit single, but won the 1957 Academy Award for Best Original Song. The screenplay is full of the kind of wisecracks that Sinatra excelled at delivering, for example, “Records, Austin. Records… You know records — those little black things that go round and round and round.”

Saul’s screenplay is to be commended for its anti-Hollywood ending. No last reel miracle or sudden epiphany arrives to rescue Joe from his downward spiral. THE JOKER IS WILD screenplay ends with Joe, alone on a street at night, talking to his “alter ego” reflected in a department store window. Joe’s last line in the screenplay, in response to his alter ego’s remark that he should head a clinic (for losers like himself?) is, “Well, happy occupational therapy.” The rewritten movie scene ends with Joe’s alter ego telling him, “You make everybody else laugh. How about making me laugh for a change,” to which Joe replies, “I’ll try. I’ll really try.”