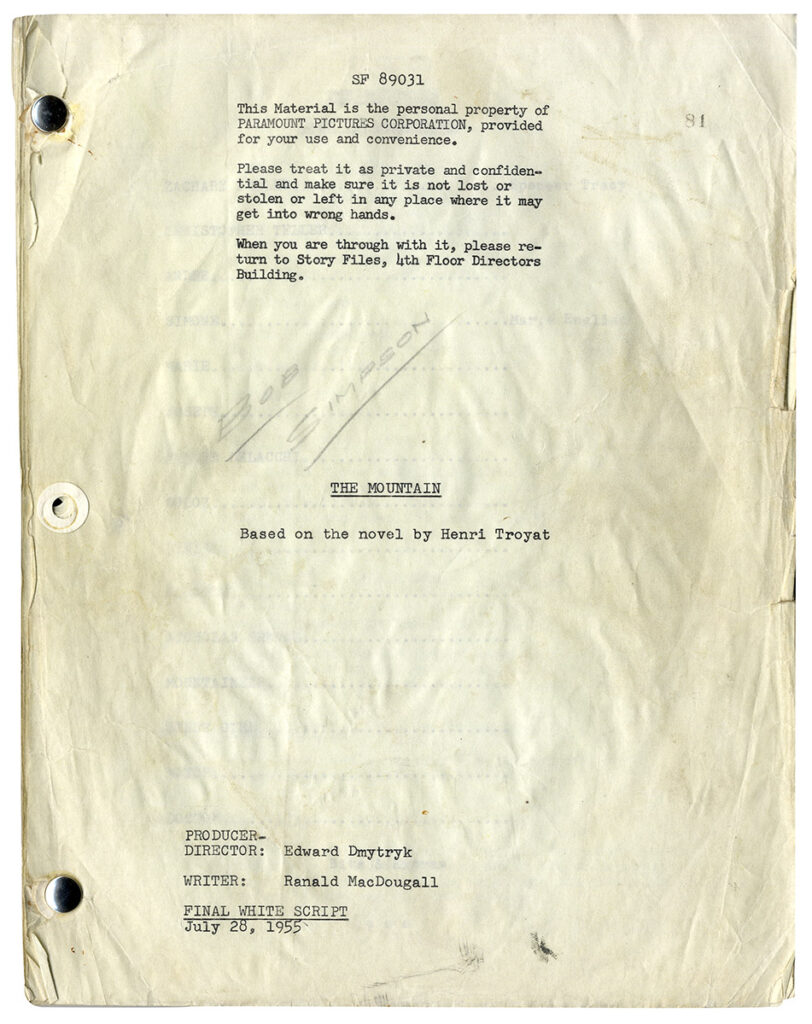 In THE MOUNTAIN, star Spencer Tracy plays a simple goodhearted peasant — a character not unlike the Portuguese fisherman that won him an Oscar in CAPTAINS COURAGEOUS (Victor Fleming, 1937) — however, in this story, Tracy’s character, named Zachary, is not only a peasant sheepherder, but the best mountain climber in his tiny Alpine village. When a plane crashes on top of a mountain adjacent to Zachary’s village, his greedy younger brother, Chris (Robert Wagner), forces Zachary to take him up the mountain for the purpose of looting the wrecked plane.

The film’s producer/director, Edward Dmytryk (1908-1999), was born in Canada of Ukrainian immigrant parents, and achieved his initial acclaim at the RKO studio directing film noirs like MURDER, MY SWEET (1944) and the Oscar-nominated CROSSFIRE (1947). His career was briefly derailed when he was identified by the House Un-American Activities Committee as one of the Hollywood Ten, but he returned to work in the 1950s making prestigious films like THE CAINE MUTINY (1954), RAINTREE COUNTY (1957), and THE YOUNG LIONS (1958). Shot on location in the French Alps in VistaVision and Technicolor, THE MOUNTAIN was one of the most visually impressive Dmytryk films to emerge from this peak period. To play Tracy’s love interest in the film, a middle-aged widow, Dmytryk cast Claire Trevor whom he had directed 12 years earlier in her career-defining role as the femme fatale in MURDER, MY SWEET.

THE MOUNTAIN was adapted to the screen by Ranald MacDougal (1915–1973), a Hollywood professional known for writing the Academy Award-nominated screenplay of MILDRED PIERCE (Michael Curtiz, 1945), and three other Curtiz films, THE UNSUSPECTED (1947), BRIGHT LEAF (1950), and THE BREAKING POINT (1950). MacDougal’s other accomplishments include directing and writing the classic end-of-the-world drama, THE WORLD, THE FLESH AND THE DEVIL (1959), with Harry Belafonte and Inger Stevens, and serving as President of the Writers Guild of America West from 1971 to 1973. Just as the core of MacDougal’s MILDRED PIERCE screenplay is the relationship between a mother and her resentful daughter, the core of MacDougal’s screenplay for THE MOUNTAIN is the relationship between the experienced mountain climber and his resentful younger brother.

THE MOUNTAIN, for all its scenic value, is essentially a character study. You have the fundamentally good older brother played by Spencer Tracy and his no-good younger brother played by Robert Wagner pitted against the titular mountain which tests both of their characters. When the two of them reach the mountaintop where the airliner has crashed, Chris, the younger brother, immediately begins ransacking the bodies of those who died in the crash looking for money and valuables. When they discover that one of the passengers, a Hindu woman (Anna Kashfi), is still — just barely — alive, Chris wants to let her die, or even kill her, to conceal his robbery of the other passengers.

Since this is a story more concerned with what people do than what they say, the visual description in MacDougal’s screenplay predominates over its dialogue. The movie follows this “Final White Script” quite closely with some cutting of the dialogue and action. For example, the movie omits part of a scene at the beginning of the screenplay where the younger brother catches one of his sheepherder older brother’s runaway lambs. It’s about the only scene in the screenplay where the younger brother acts sympathetically.

The theme of man versus nature would be revisited by Spencer Tracy two years later in THE OLD MAN AND THE SEA (John Sturges, 1958). THE MOUNTAIN is also typical of Tracy’s later films (BAD DAY AT BLACK ROCK, INHERIT THE WIND, JUDGMENT AT NUREMBERG) insofar as the character he plays is a genuinely good man. Here, Tracy’s virtuous character risks everything to bring the Hindu woman down safely from the mountaintop, and miraculously he survives. His more selfish younger brother doesn’t make it. Zachary tells the world that his younger brother died a hero, but the film’s viewers (or readers of its screenplay) know differently.