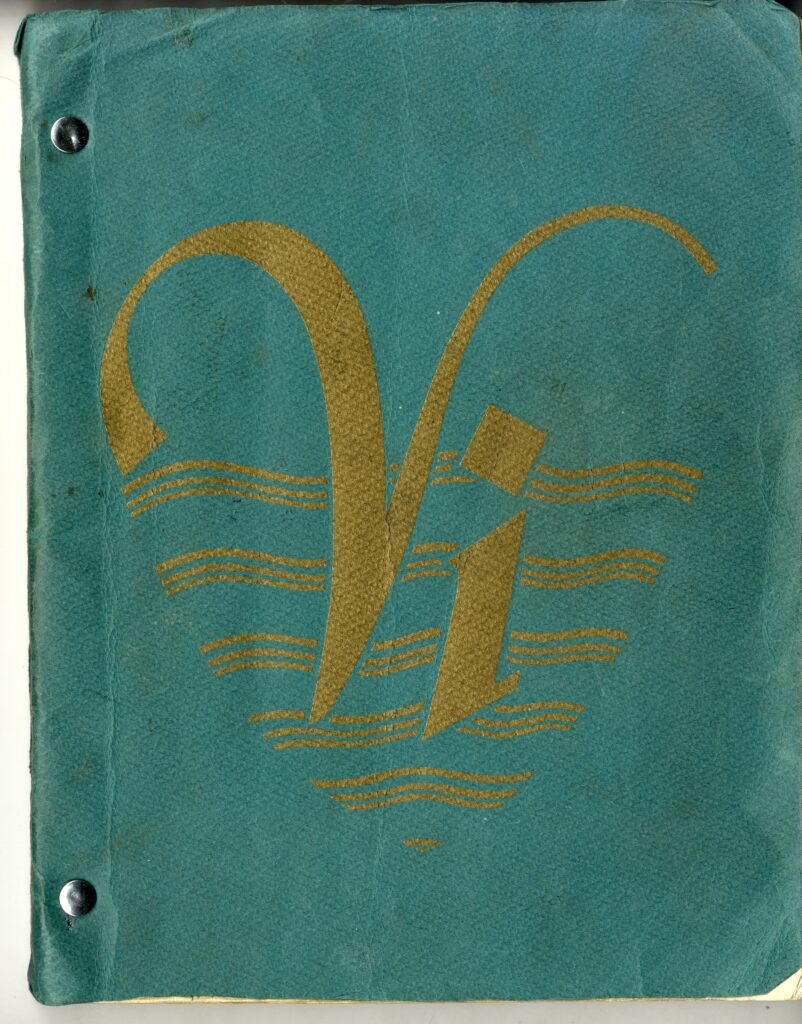 Based on the novel The Magnificent Bastards by Lucy Herndon Crockett. [Hollywood: Paramount Pictures, 1955].  Vintage original film script, quarto, brad bound, mimeograph. This script is bound in “Vi” printed green wrappers. It is bound with a cast list and then segues to page 1 of the script. No title page is included. The first few pages have light soiling and curling at the extreme bottom right edges, overall very good.

The career of Hollywood writer/director George Seaton (1911-1979) is bookended by two monster hits, MIRACLE ON 34TH STREET (1947) and AIRPORT (1970). The former won him an Academy Award for Best Screenplay. The latter earned nine Academy Award nominations including Best Picture, Best Supporting Actress (which it won), and a Best Screenplay nomination for Seaton’s adaptation of Arthur Hailey’s novel.

A consummate Hollywood professional, Seaton began his show business career as an actor — he was the original “Lone Ranger” on radio — and joined the writing staff of MGM in 1933. The Internet Movie Database credits Seaton as a writer on more than 40 movie and television projects, and as the director of more than 20 movies, including several with William Holden, some of which he also produced. His first William Holden film was the comedy APARTMENT FOR PEGGY (1948). His last Holden film was THE COUNTERFEIT TRAITOR (1962). His 1954 film with Holden, THE COUNTRY GIRL, won Seaton another Academy Award for Best Adapted Screenplay. THE PROUD AND THE PROFANE (1956) was the fourth of his six collaborations with the star.

THE PROUD AND THE PROFANE is a wartime romance, taking place mostly on the South Pacific island of New Caledonia in 1943. The leading female character is Lee, a Red Cross nurse described in the screenplay as “about thirty, ash-blonde, composed, sensitive, reserved, with a well-bred restraint in every gesture.” She is played in the movie by Deborah Kerr.

Lee has come to the South Pacific because her husband, a shy and sensitive man, died at Guadalcanal, and she wants to learn more about what happened to him. While working as a nurse, she meets the marine Colonel Black described in Seaton’s screenplay as “thirty-seven, dark, intense. He is part [Native American] and looks it. His black hair is closely cropped and his mustache is neatly trimmed. He is a professional fighting man, a hard, strict disciplinarian without an ounce of sentiment.” He is played by William Holden.

Though the macho, domineering Colonel Black is the polar opposite of Lee’s sensitive deceased husband, she finds herself unable to resist his advances, and their love affair blossoms against the background of the horrors of war. He promises to marry her.

There is a third significant character named Kate, an older and wiser woman, Lee’s superior officer. The screenplays describes her as “grey, warm, innately perceptive and intelligent. In contrast to Lee, she is as open as a house without a roof.” She is played by Thelma Ritter who Seaton directed in her very first on-screen appearance (MIRACLE ON 34TH STREET) and her last (WHAT’S SO BAD ABOUT FEELING GOOD?).

Kate has a subplot of her own involving a troubled juvenile delinquent, now a soldier (played by Dewey Martin), to whom she had been a kind of surrogate mother back in the States.

Lee’s and the Colonel’s romance turns sour when Lee learns that the Colonel has an alcoholic wife back home. Although up to this point, the film has closely tracked Seaton’s screenplay draft, here we begin to see some changes and modifications. For example, during their big confrontation, when the Colonel tells Lee, “In a few years you’ll look back and laugh at it. Take my advice,” Lee replies — in the movie, but not in the screenplay — “And what advice do you have for your son or daughter? What shall you say to him or her?” making explicit what the screenplay has only hinted at — that she is pregnant.

There is a scuffle and Lee Is seriously injured — losing the child. In the screenplay, there is another confrontation between the Colonel and Lee in the hospital, but in the movie it is replaced by Kate telling the Colonel, “She doesn’t want to see you.”

The Colonel goes off to combat, and comes back with a brain injury. All he can do is repeat the words, “Forgive me.” Lee can’t find it in her heart to forgive him until she visits the Guadalcanal cemetery where her husband is buried, and — in the film’s best scene — learns from a soldier who knew him that she was in her husband’s eyes a clinging “bloodsucker” who stifled his career ambitions (which is probably what drove him into the military in the first place). In short, she learns that she is not so perfect herself, which frees her to forgive others, starting with the Colonel.

Simultaneously a women’s picture and a war melodrama, George Seaton’s THE PROUD AND THE PROFANE is a screenplay and film that interrogates traditional ideas of masculinity — does a man have to abandon his humanity to win a war? — and explores the necessity for forgiveness. It’s also a terrific vehicle for its three leads, Holden, Kerr, and Ritter.