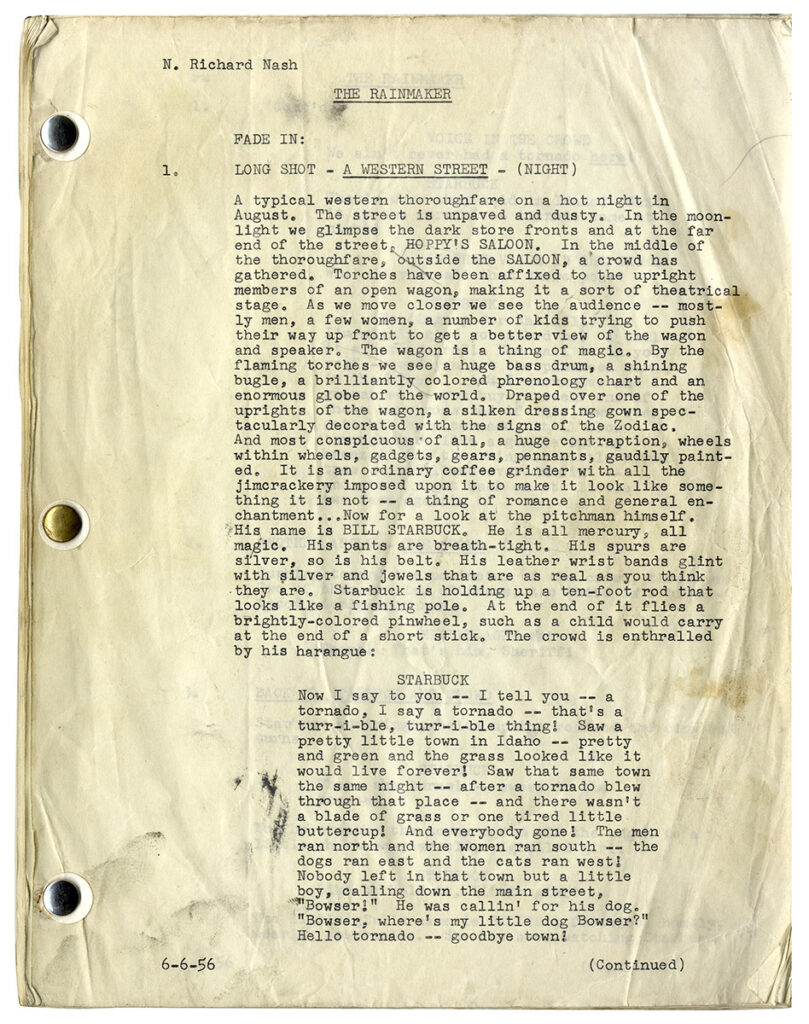 THE RAINMAKER is notable for its casting of Burt Lancaster opposite Katherine Hepburn in two of their most archetypal roles. Lancaster was cast as the grinning confidence man, Starbuck, an archetype that would reach its apotheosis in his Oscar-winning performance as the revival preacher, ELMER GANTRY (Richard Brooks, 1960). Hepburn was cast as the spinster, Lizzie, a type which she had previously played to perfection opposite Humphrey Bogart in John Huston’s THE AFRICAN QUEEN (1951) and opposite Rossano Brazzi in David Lean’s SUMMERTIME (1955).

THE RAINMAKER’s screenplay is by N. Richard Nash (1913-2000), based on his 1954 Broadway play of the same name, which starred Darren McGavin and Geraldine Page in the roles played on film by Lancaster and Hepburn. Nash’s other notable works include the screenplay for the Ann Sheridan film noir, NORA PRENTISS (Vincent Sherman, 1947), the screenplay for the Otto Preminger version of PORGY AND BESS (1959), and the 1975 novel, CRY MACHO, which eventually became a 2021 movie directed by and starring Clint Eastwood.

The film’s director, Joseph Anthony, though he also directed the movie version of Thornton Wilder’s THE MATCHMAKER (1958), was known primarily for his work as a Broadway stage director. He was the recipient of five Tony Award nominations, including one for his direction of the 1963 musical adaptation of THE RAINMAKER called 110 IN THE SHADE (book by N. Richard Nash, lyrics and music by Tom Jones and Harvey Schmidt).

The rights to the play were purchased by top Paramount producer, Hal B. Wallis. Wallis had previously produced four Paramount films starring Burt Lancaster — DESERT FURY (1947), I WALK ALONE (1947), SORRY, WRONG NUMBER (1948), and ROPE OF SAND (1949) — and following THE RAINMAKER, would produce the Lancaster vehicle, GUNFIGHT AT THE O.K. CORRAL (John Sturges, 1957). Another frequent Wallis collaborator, Wendell Corey, was cast in the role of THE RAINMAKER’s Deputy Sheriff File.

The story takes place in a small Midwestern town during the Depression era. There are a handful of characters, and each of them is defined by how they react to the outsider Starbuck. The principal character is the spinster Lizzie, who is attractive enough, but remains unhappily unmarried because she is too bright and too “serious.” There is her father, H.C., described in the script as “capable, a man to take store in, a man of gentleness and vision,” her older brother, Noah (Lloyd Bridges), whose name derives from the word “No,” signifying his essential skepticism, and her younger brother Jimmy (Earl Holliman), who is energetic and open-hearted, but who has been told all his life that he is “dumb” (Holliman won a Golden Globe for his performance in this role). Finally, there is Deputy Sheriff File (Wendell Corey) who tells everyone the lie that he is a widower when, in fact, his wife left him because he was too proud to tell her to stay.

Starbuck, the self-described rainmaker, is the drama’s pivotal character. Is he a poet and a dreamer? A liar and a trickster? Or all of the above?

Starbuck represents the idea of faith. In the landscape of American theater, he stands midway between the Gentleman Caller of Tennesee Williams’ GLASS MENAGERIE and Professor Harold Hill of THE MUSIC MAN. And Lizzie is not unlike poor shy Laura from the Williams play. But unlike Williams’ Gentleman Caller, Starbuck doesn’t bring faith and hope only to take them away again. The confidence in her own beauty and self-worth that he awakens in Lizzie is permanent enough for her to enter into a real relationship, not with the mercurial Starbuck, but with the more down-to-earth Deputy File.

The differences between this film script and the movie that was made from it are largely a matter of editing and compression. Much of the script’s dialogue has been trimmed, and some scenes and peripheral characters were eliminated altogether. An example of the way scenes were compressed — The screenplay opens with Starbuck making his charlatan’s pitch to the rubes in another town until he is chased away by lawmen, followed by a two-page dialogue scene where he says goodbye to a little girl, Belinda, who has fallen under his spell. In the movie, said goodbye scene is compressed to just three words: “So long, Belinda!”

THE RAINMAKER is not a work of realism, but of poetic realism, meant to be played with a heightened sense of theatricality, and that is how Lancaster and Hepburn play it. Watching these two theater-trained professionals perform Nash’s dialogue in THE RAINMAKER movie allows the viewer to see, maybe more than in any other movie, what the two of them must have been like on stage.

THE RAINMAKER is a minor classic of ’50s American theater, periodically revived here and abroad. Nash’s film script does his play justice.