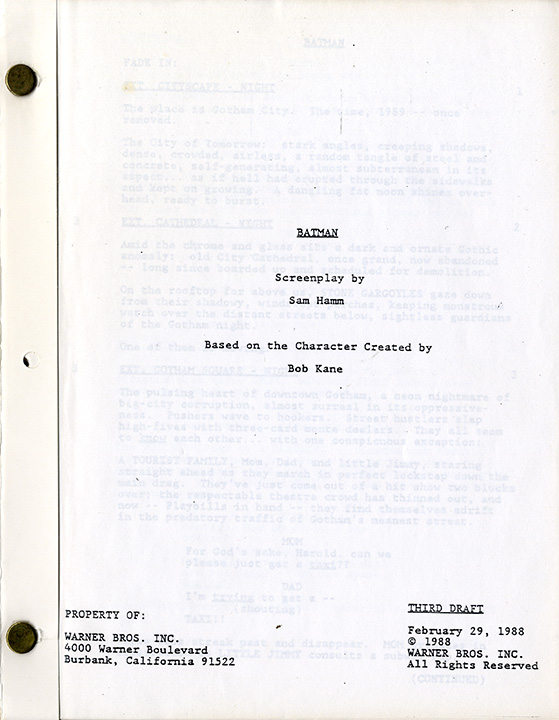 The modern superhero movie got its start with Richard Donner’s SUPERMAN: THE MOVIE, released in 1978, and Tim Burton’s BATMAN, released in 1989. There had been a Batman movie serial released in the 1940s and a campy Batman television series that was extremely popular in the 1960s. Regardless, the 1978 SUPERMAN and the 1989 BATMAN — both of them big-budgeted films with big stars, and both of them huge hits — were the templates for the superhero blockbusters we see today.

The Batman character and his alter-ego Bruce Wayne were created by artist Bob Kane and writer Bill Finger, and first appeared in Detective Comics #27, in 1939. Kane and Finger’s comic book superhero had in turn been inspired by such pulp fiction characters as JUDEX — filmed as a serial by Louis Feuillade in 1916 — and Walter B. Gibson’s THE SHADOW — who attained his greatest popularity as the hero of a radio show in the 1930s.

Screenwriter Sam Hamm (born November 19, 1955), a self-described “failed cartoonist” and comic book fan with one prior screenplay to his credit (1983’s NEVER CRY WOLF), was approached by director Tim Burton to write the BATMAN screenplay shortly after Burton himself had been hired to work on the project by producers Jon Peters and Peter Guber. The project had a long development process involving numerous other writers and directors prior to Burton and Hamm. In contrast to prior treatments, Burton and Hamm wanted to give the film a darker, more serious tone inspired by graphic novels like Alan Moore and Brian Bolland’s BATMAN: THE KILLING JOKE and Frank Miller’s THE DARK KNIGHT RETURNS. Though numerous other actors were considered for the parts, Michael Keaton was ultimately cast as Bruce Wayne/Batman, and Jack Nicholson as his antagonist, the Joker.

This screenplay draft closely resembles the completed film, although some lines have been trimmed and others improved on. Some scenes and sub-plots have been revised or omitted, for example: