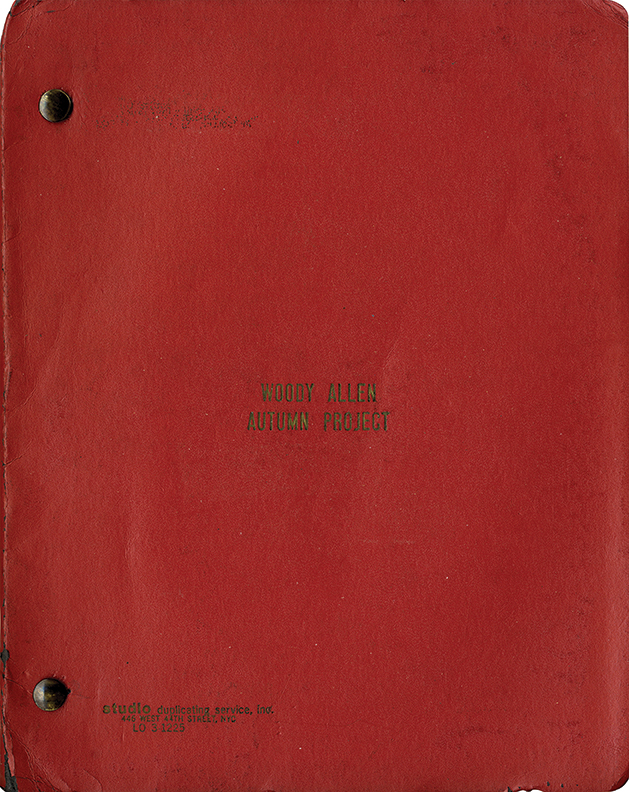 STARDUST MEMORIES, released in 1980, was the tenth feature film written and directed by actor/comedian Woody Allen (born Allan Stewart Konigsberg, Brooklyn, NY, 1935), and his fourth “serious” film, following the Oscar-winning ANNIE HALL (1977), INTERIORS (1978), and MANHATTAN (1979). A metafictional movie about a filmmaker (played by Allen), written and directed in the style of Federico Fellini’s 8 ½ (1963), STARDUST MEMORIES even acknowledges its place in Allen’s oeuvre in a fantasy sequence where a group of visiting extraterrestrials tells the director protagonist that they really enjoy his movies, “particularly your early funny ones“. Notwithstanding its essential seriousness, STARDUST MEMORIES is as witty as anything the screenwriter has ever conceived.

Notably, the sequence with the extraterrestrials – arguably the most famous and oft-quoted scene of STARDUST MEMORIES – does not appear in this screenplay draft. While this draft, entitled Woody Allen Autumn Project, is an exceptionally well written screenplay, and contains almost all of the scenes and characters that will appear in the completed movie, it is clearly a work in progress, one that was significantly polished and refined before shooting began. In the process, numerous funny lines and bits of business were modified or replaced by better ones.

Overtly paying homage to Fellini’s 8 ½, Allen’s screenplay mixes scenes of “reality” with flashbacks, and fantasy sequences, and movies-within-the-movie. Like 8 ½, it begins with a claustrophobic dream sequence:

“The scene is a railway station. It doesn’t matter where. A small, exterior railway station. There is something slightly off about the whole event. Perhaps it’s all dead quiet, giving the atmosphere the mildest undercurrent of impending anxiety. . . . Sitting into his seat, next to the window, in one train, is Sandy Bates [Allen], apparently ready to begin a journey somewhere.”

Though the screenplay and movie’s most obvious inspiration is Fellini, this opening sequence also recalls Allen’s other primary influence, Swedish filmmaker Ingmar Bergman, whose WILD STRAWBERRIES (1957) opens with a similarly bleak and surreal dream sequence. The backdrop for Allen’s story is protagonist Sandy Bates’ (Allen’s) attendance at a film retrospective held in his honor, leading to interactions with the other people – critics, fans, etc. – who are also in attendance. As his manager explains:

“It’s one lousy weekend. You’ll drive up, they’ll honor you, they’ll see your films, they’ll ask questions, compliment you and it’ll all be over.”

Q & A sessions with the filmmaker provide ample opportunities for Allen’s witticisms and bon mots, for example this oblique reference to Bergman (not in the completed film):

You always seem depressed and gloomy.

Yes, a group of psychiatrists has voted me

If anything, Allen’s screenplay is even more explicit in its concerns than the completed movie, as in this dialogue excerpt and screenwriter’s comment (also not in the completed film):

Do you think life has meaning?

How should we live?

These last questions, of course, though asked by the audience, are really three self-questioning points and naturally, are what the essence of the film is about.

Apart from the existential questions that trouble the protagonist, we also see his interactions with three principle women – Dorrie (Charlotte Rampling), a beautiful neurotic seen only in the flashback sequences; Daisy (Jessica Harper) a young woman he encounters at the retrospective who reminds him of Dorrie (and therefore provides an opportunity to repeat the same mistakes); and finally Isobel (Marie-Christine Barrault) a comparatively healthy married Frenchwoman with two children, who represents stability and acceptance.

Throughout it all, Sandy looks for “one thing to give some kind of meaning to my life“, which he ultimately finds in a brief flashback memory of a moment when he and the troubled Dorrie were listening quietly and happily together (for once) to a recording by Louis Armstrong of “Stardust” – providing the movie with its title, STARDUST MEMORIES.

One of the most radical differences between this screenplay draft and the completed film is a scene, added for the movie, where Sandy is approached by a fan who tells him how much he admires his work and then shoots him. (In a grim example of life imitating art, John Lennon was shot by a fan on December 8, 1980, roughly two months after Allen’s film was released.) In the screenplay draft, there is no shooting, but Sandy has a heart attack. In both the screenplay and completed film, Sandy’s “death” leads to a memorial service – humorously commented upon by Sandy. In the screenplay, Sandy’s heart attack turns out to have been a psychosomatic false alarm. In the movie, Sandy’s shooting and subsequent death are simply another of the character’s fantasies.

The screenplay ends with a spotlighted Sandy and Isobel dancing alone in a ballroom. The movie ends in a screening room filled with all of the characters we have previously seen, then Allen’s character alone, and finally an empty white screen.

Cited by Allen himself as a personal favorite, STARDUST MEMORIES, the film, and the “Woody Allen Autumn Project” screenplay that was the basis of it, surely rank among Allen’s finest and most personal creations.