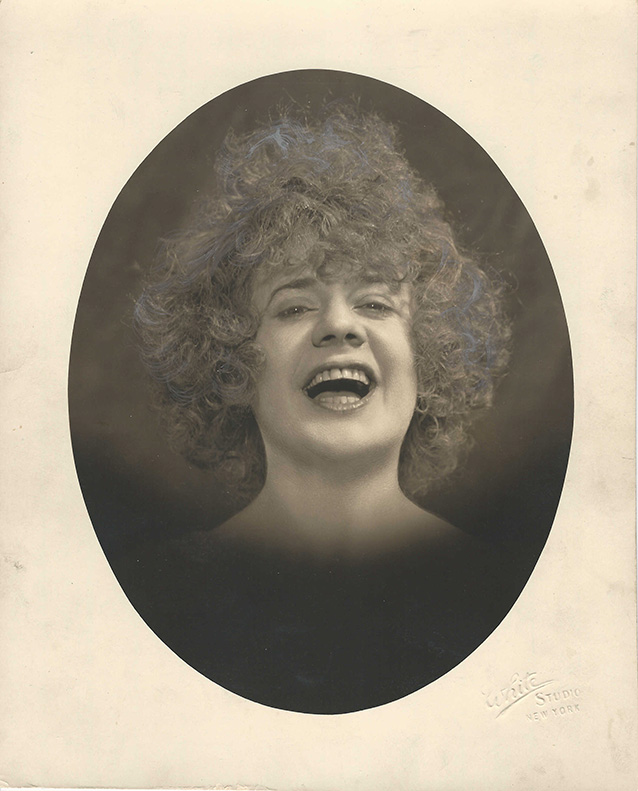 Born in Canada in 1878, Eva was known as “the girl who made Vaudeville famous”,”The Queen of Vaudeville” and the “I Don’t Care Girl” (for the song by that name, her most popular hit). It was her enthusiasm, not her voice, which wowed audiences. She was one of the first Florence Ziegfeld stars and was known for her outrageous publicity campaigns and lavish costumes. One exploit had her marrying cross-dressing actor Julian Eltinge, he in bride’s gown, she in tuxedo. They did not actually marry, however.

Losing money in the 1929 crash, she retired from the biz in 1930 and developed cataracts in her later years and became blind. MGM bought the rights to her story to star Judy Garland in the 1940s, and a film was made later of Eva’s life with Mitzi Gaynor (THE I DON’T CARE GIRL).

Photo is embossed with “White Studio, New York” blind stamp at bottom right corner. There are two ink date stamps on the verso. One is for “The Philadelphia Inquirer Oct. 7, 1927” usage, for which Tanguay may have been playing the newly-renovated Allegheny Theatre. Ten years before she headlined at the Palace Theatre in New York City and made silent films at Sezlnick Studios. In 1927 she was still touring; portrait may be earlier. The second ink stamp date is for Jan. 1947 for reuse at the time of her death.