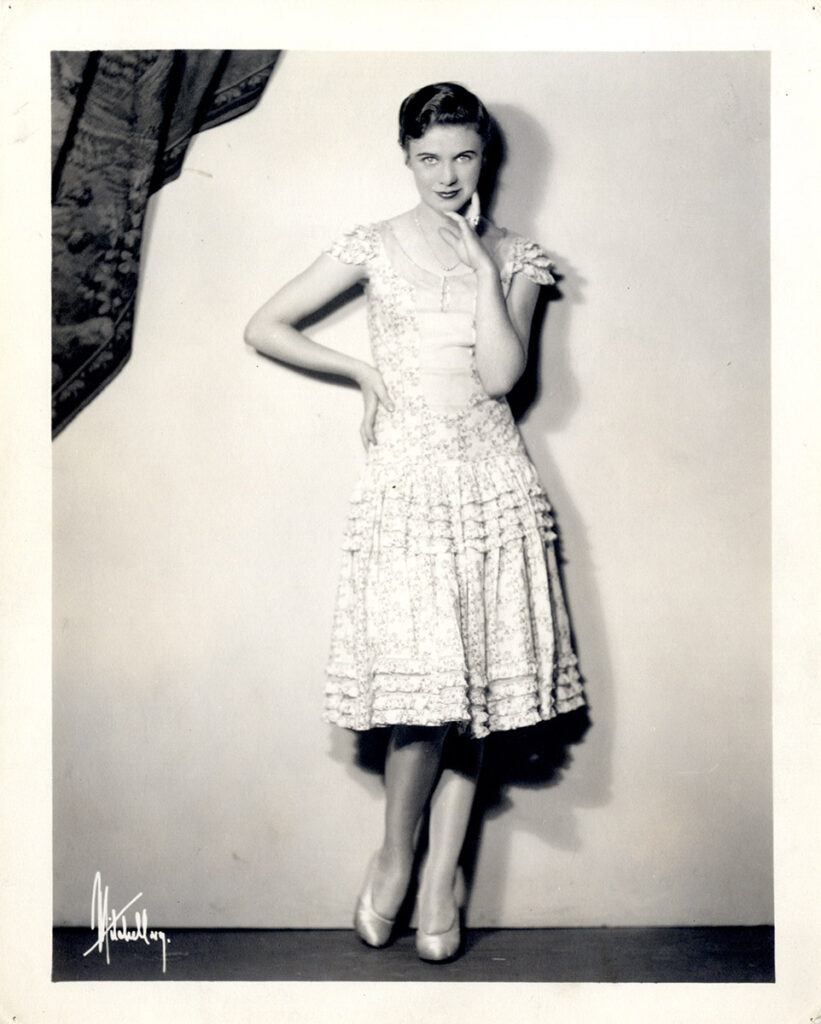 Thanks to the guidance of her driven stage mother, Ginger Rogers by 1930 was featured on Broadway. Ginger would also appear in a few film shorts while in New York at this time. She created the roles of Babe Green in TOP SPEED and Molly Gray in George and Ira Gershwin’s GIRL CRAZY at the Alvin Theatre during the 1929-30 Broadway seasons. Photo is by theatrical portrait photographer Herbert Mitchell. Her name is written in pencil on the verso, along with the caption “After the show”.

Born Daniel Epstien, Herbert Mitchell left his native Poland with his family, fleeing the Czarist pogroms, shortly after the turn of the 20th century. The Epsteins settled in New Jersey. Visually creative, Mitchell taught himself to paint in his early teens, using found materials. In 1915 he secured a job as set painter at a B. F. Keith Vaudeville theater on Broadway. He used his backstage access to celebrities as occasions to create on-the-scene caricatures that he sold to the Hudson Dispatch newspapers. “The Boy Cartoonist” was soon contributing lobby sketches of performers to the B. F. Keith theaters.

After a brief experiment producing short animated entr’acte films for the Palace Theater, Mitchell established Mitchell-Strand N.Y.C. studio at 1579 Broadway in 1922-23. There, he produced “cartoons, caricatures, and artistic photographs”. Graphic work dominated his output until 1928 when Herbert Mitchell broke into the magazine market with his photographs.

His earliest work displayed his painterly disposition in backgrounds which he painted on the negatives. This made Mitchell a participant in the new Broadway school of celebrity photographs who defied Hollywood hyper-realism by making the hand of the artist visible in the image. Herbert Mitchell preferred abstract patterning or indeterminate zones of light or dark. His elegantly retouched faces had a quality of sculptural palpability that enabled him to thrive in the 1930s when taste turned toward a humane style of portraiture.

Mitchell was a master of floating heads and the waist-up portrait shot with sitters posed at an angle 25-50 degrees off center. By frequently employing light toned patterned or plain backgrounds, he endeared himself to periodical photo editors for whom the dark backgrounds favored by art photographs presented reproduction difficulties. He never used props. He preferred shooting personalities in their own clothes rather than costumes. He had a talent for suggesting that the sitter was absorbed in thought or amused at his or her surroundings. He signed his best pieces in white ink.

In the 1930s he offered the following observations about facial features and their contribution to attractiveness. “A large mouth is more alluring than a perfectly-shaped small one for it denotes a gay, magnanimous character. Eyes are most important. Large, soulful ones or narrow, deep-set eyes each have a very definite attraction… you cannot make up a certain set of rules. Little irregularities make a face more interesting.”