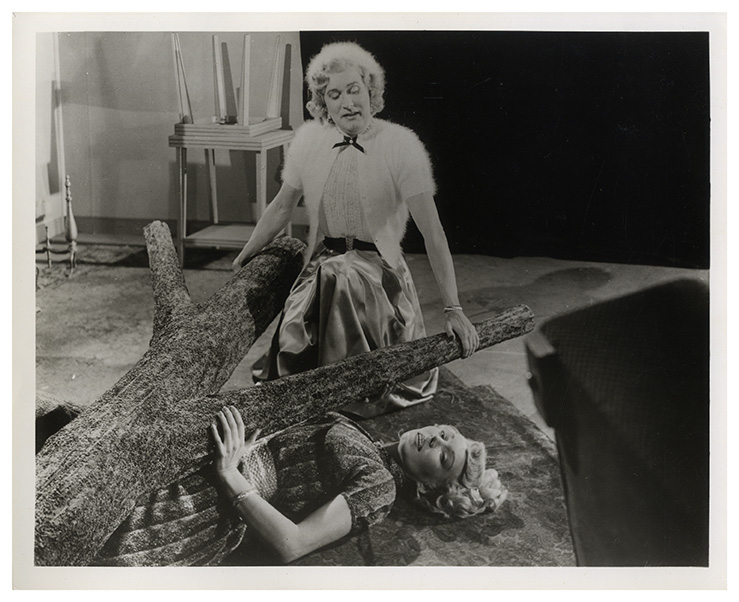 Almost certainly, the first American feature film about transsexual life. Edward Wood, Jr. (star, writer and director), Bela Lugosi; Screen Classics. Director Ed Wood, Jr.’s auspicious feature film debut took on the almost unthinkable subject of transvestites and transsexuals. Long considered one of the worst films of all time, the film has maintained a solid cult following over the decades due to Wood’s decidedly distinctive style and z-budget production values. However, it is also significant in the history of American sexuality on screen.

Although when the film was rediscovered in the early-80s it was initially viewed as “so bad as to be good,” an unbiased viewing of it now can be very surprising, as, in its own way, it is a true avant-garde film, with its merging of fiction and documentary and with its forays into what we would now describe as meta-fiction.

Ephemera of any kind from the film is rare. I have only once before had a photo set from this film, and that was half of the size of this set.

The aim of the film’s producer, George Weiss, was to capitalize on the story of Christina Jorgensen, who in 1952 became the first man widely-known to undergo sex reassignment surgery. The film’s first half guides the viewer down a crooked path that includes multiple narration techniques, BDSM pornography, and a buffalo stampede in order to convey a story about a man named Glen who wishes to become a transvestite, struggling to gain acceptance from his girlfriend. The second half, added largely at the demand of the distributor to include sex change in the content, is about a pseudo-hermaphrodite named Alan who fights his way through World War II in women’s underwear, finally returning from the conflict to have the surgery he/she has always desired.

The photos cover most key elements from the film, including narrator Lugosi in his armchair, Glenda in her new angora sweater, the doctor in front of a female physiology chart, the surgery and the luckless woman involved with Glen. Lugosi is not pictured on any of the film’s posters, and no lobby cards were ever made — this collection contains four separate photos of Lugosi. Likewise, the ten images of Ed Wood — seven with his costar, girlfriend Dolores Fuller, one of him with the angora sweater looking into a mirror, and one of him deeply affected by touching a nylon fabric — are all really, really rare!