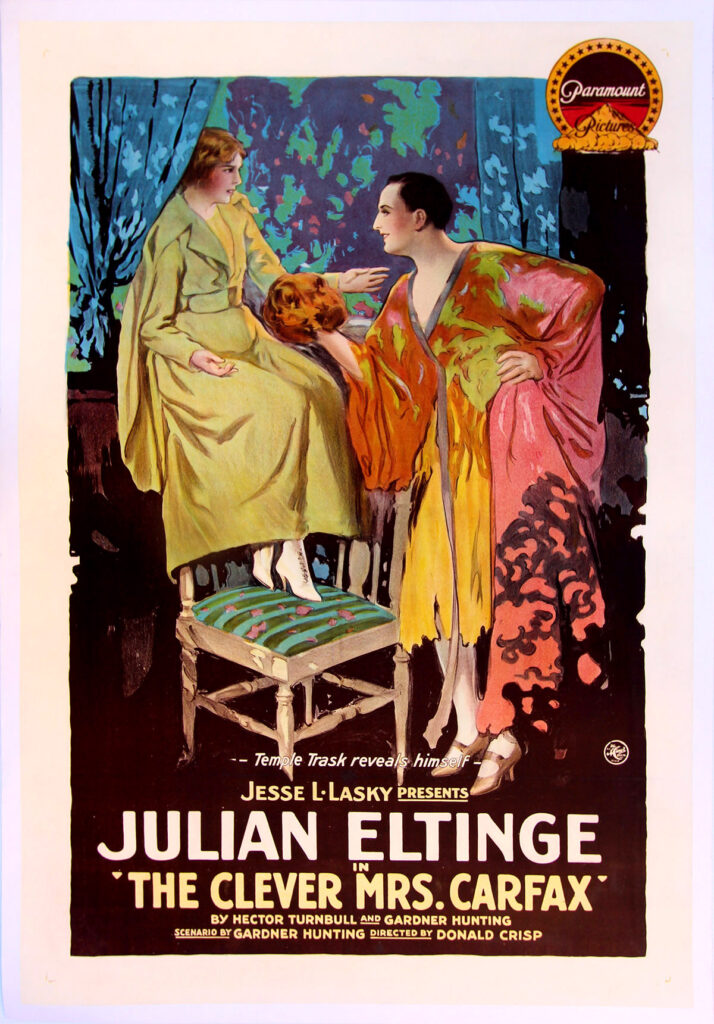 An exceedingly scarce poster for which I can find no copy having ever appeared at auction, or any listed in OCLC.

Julian Eltinge was the foremost drag performer of his generation and was in his time a huge presence on Broadway. This was his fifth film appearance, and his second feature for Paramount. This is an entirely lost film, and this poster is one of the few fragments of any kind which have survived.

Newspaper publisher Temple Trask, who answers the “Letters to the Lovelorn” column under the nom-de-plume “Mrs. Carfax”, becomes the hit of his college reunion when he revives his female impersonation act. Returning home, Temple meets Billy Wise, another college friend, who wagers 100 dollars that Temple will not go into a restaurant dressed as a woman.

He takes the dare, then sees Helen Scott in the restaurant and, although he is a cynic who does not like women because he knows too much about them, he falls in love. When he notices that Adrian Graw, a crook whom Temple knew when he was a cub reporter, is after Helen’s fortune, Temple, impersonating Mrs. Carfax, accompanies Helen and her grandmother, Mrs. Mary Keyes, aboard a steamer to protect them.

On the voyage, Helen becomes good friends with Mrs. Carfax and falls in love with Temple. After Mrs. Carfax punches Graw during a struggle for Mrs. Keyes’s bonds, the police arrest Graw and his accomplice, Rena Varsey. Helen, astonished when Temple removes his wig, falls joyfully into his arms.

The delicate colors of the poster’s stone lithography illustrate the scene where Temple (Eltinge) removes his wig and “reveals himself”.