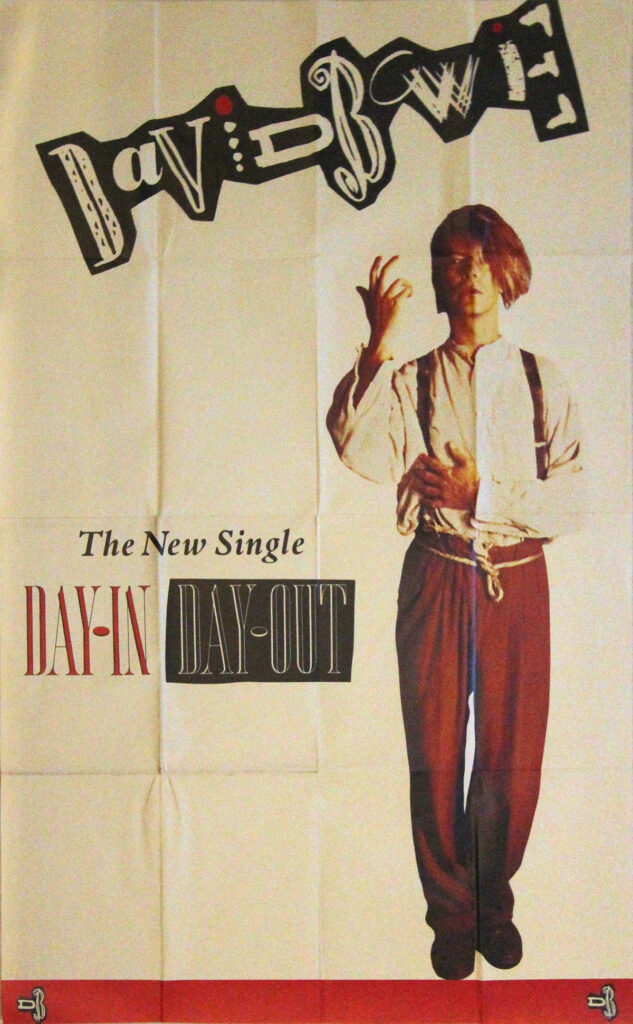 “‘Day-In Day-Out’ is a song recorded by English singer David Bowie, serving as the opening track for his seventeenth studio album, Never Let Me Down (1987). It was issued as a single on 23 March 1987, ahead of the record’s release. The recording was solely written by Bowie, while production was handled by him along with David Richards. An R&B track, ‘Day-In Day-Out’ criticizes the treatment of the homeless in the United States at that time, and deals with the depths to which a young mother sinks to feed her child.

“It was recorded in the autumn of 1986 at Mountain Studios in the same city. The singer penned the song out of concern for the treatment of the homeless in the United States, a foray into social commentary that he would further pursue with his grunge-precursor band Tin Machine two years later.

“‘Day-In Day-Out’ is an R&B song, being reminiscent of some of the singer’s R&B work in the 1970s. One author said that it is ‘an example of Bowie’s strength in the R&B genre.’ The lyrics of the song were compared by one writer to those of Dolly Parton’s ‘9 to 5’ (1980), and deal with the depths a young mother has to sink to feed her child. Bowie claimed the song was selected as the lead-off single for Never Let Me Down ‘more as a statement of energy’ about the album, as opposed to directly trying for a chart-topping single. It was released on 23 March 1987 by EMI on multiple 7′ and 12′ single formats, featuring B-side single ‘Julie’.” (Wikipedia)