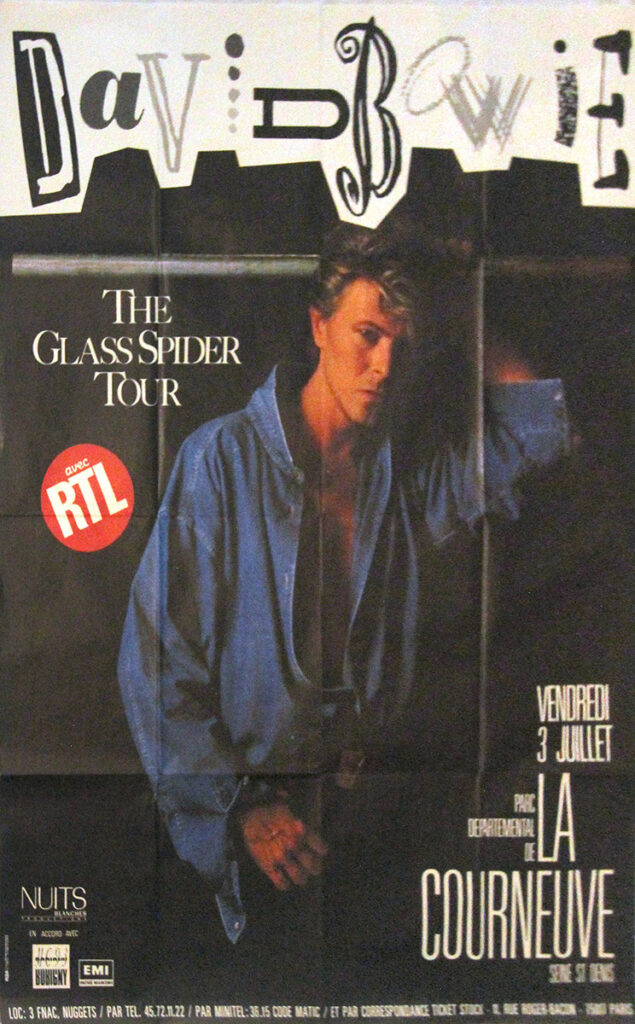 “The Glass Spider Tour was a 1987 worldwide concert tour by English musician David Bowie, launched in support of his album Never Let Me Down. It began in May 1987 and was preceded by a two-week press tour that saw Bowie visit nine countries throughout Europe and North America to drum up public interest in the tour. The Glass Spider Tour was the first Bowie tour to visit Austria, Italy, Spain, Ireland and Wales.

“Bowie conceived the tour as a theatrical show, and included spoken-word introductions to some songs, vignettes, and employed visuals including projected videos, theatrical lighting and stage props. On stage, Bowie was joined by guitarist Peter Frampton and a troupe of five dancers (choreographed by long-time Bowie collaborator Toni Basil). With the theme ‘Rock stars vs Reality’, the show was divided into two acts and an encore. The set list was modified over the course of the tour as Bowie dropped some of his newer material in favour of older songs from his repertoire.

“The tour’s set, described at the time as ‘the largest touring set ever,’ was designed to look like a giant spider. It was 60 feet (18.3m) high, 64 feet (19.5m) wide and included giant vacuum tube legs that were lit from the inside with 20,000′ (6,096m) of color-changing lights. A single set took 43 trucks to move and was estimated to weigh 360 tons. 16′ x 20′ (4.9m x 6m) video screens displayed video and images from the show to those in the audience who were further away from the stage. The system required to run the show included two separate sound systems, 260 speaker cabinets, 1,000 lights (with an output total of 600,000 watts) and three computers. Mark Ravitz, the set designer, had previously designed Bowie’s 1974 Diamond Dogs Tour set.

“This was Bowie’s first tour where wireless microphone technology was available, allowing Bowie considerable freedom to move around the stage during a concert. This allowed him to interact with the dancers and musicians much more freely, and as such the set included 3-story high mobile scaffolding, onto which Bowie and his dancers would occasionally climb during the show.” (Wikipedia)