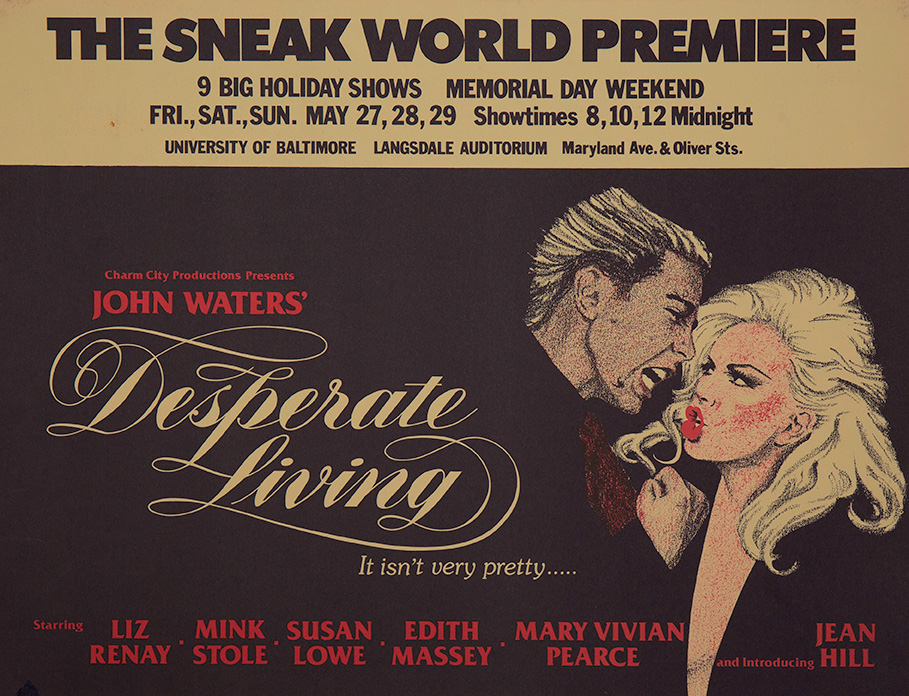 The extremely scarce original poster for the one classic early John Waters film made without Divine (who, regrettably, could not participate because she was contractually committed to performing on stage in THE NEON WOMAN), and a kind of conclusion to a sort of trilogy which began with PINK FLAMINGOS, continued with FEMALE TROUBLE, and ended with this equally transgressive film.

For those who don’t know this film, here is a summary from Wikipedia:

”Peggy Gravel, a neurotic, delusional, suburban housewife, and her overweight maid, Grizelda Brown, go on the lam after Grizelda smothers Peggy’s husband, Bosley, to death. The two are arrested by a cross-dressing policeman who gives them an ultimatum: go to jail or be exiled to Mortville, a filthy shantytown ruled by the evil Queen Carlotta and her treasonous daughter, Princess Coo-Coo.

Peggy and Grizelda choose Mortville, but still engage in lesbian prison sex. They become associates of self-hating lesbian wrestler Mole McHenry, who wants a sex change to please her lover, Muffy St. Jacques. Most of Mortville’s social outcasts—criminals, nudists, and sexual deviants—conspire to overthrow Queen Carlotta, who banishes Coo-Coo after she elopes with a garbage collector, who is later shot to death by the guards. Coo-Coo hides in Peggy and Grizelda’s house with her dead lover. When Peggy betrays Coo-Coo to the Queen’s guards, Grizelda fights them, and dies when the house collapses on her. Peggy, however, joins the queen in terrorizing her subjects, even infecting them (and Princess Coo-Coo) with rabies.

“Eventually, Mortville’s denizens, led by Mole, overthrow Queen Carlotta and execute Peggy by shooting a gun up her anus. To celebrate their freedom, the townsfolk roast Carlotta on a spit and serve her, pig-like, on a platter with an apple in her mouth.”

This poster is obviously very uncommon because it was literally produced for the movie’s world premiere in Baltimore, which consisted of shows over a three day weekend. It precedes the normal poster (of a rat on a dinner plate) that was used by New Line Cinema for the film’s theatrical release, for which the distributor had it blown up from 16 mm. to 35 mm.

Unfolded, one small area of surface paper loss in the blank lower left has been filled in with black ink, VERY GOOD+.