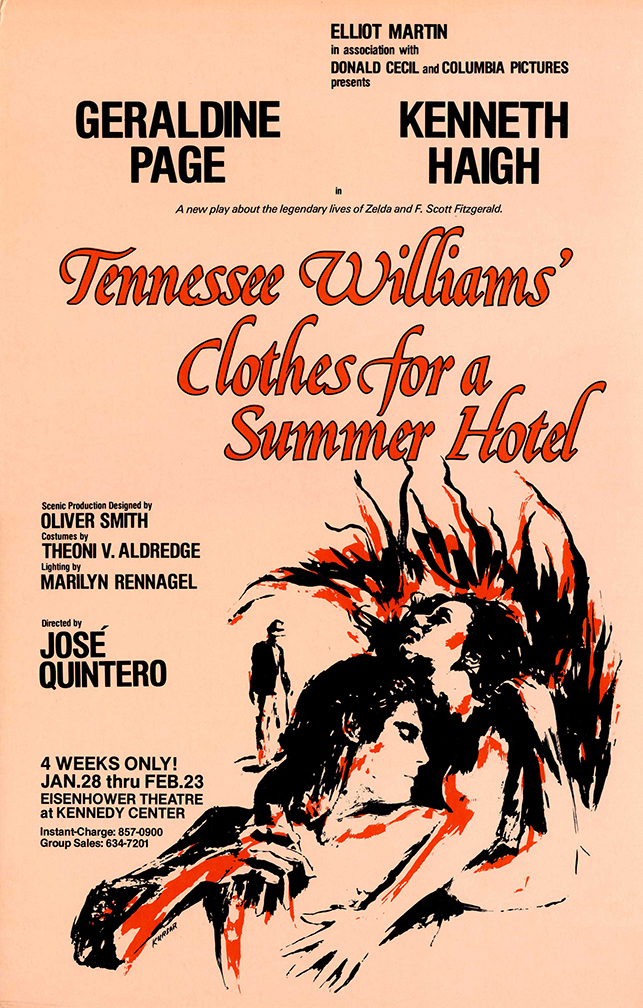 “A play about the relationship between novelist F. Scott Fitzgerald and his wife Zelda. A critical and commercial failure, it was Williams’ last play to debut on Broadway during his lifetime. The play takes place over a one-day visit Scott pays the institutionalized Zelda at Highland Mental Hospital in Asheville, North Carolina, with a series of flashbacks to their marriage in the twenties. Williams began work in 1976 on what he envisioned as a ‘long play’ about the Fitzgeralds (he eventually cut it down), and had Geraldine Page in mind to play Zelda from the start.

“Williams biographer Donald Spoto has argued that Scott’s visit to Zelda was a ‘clear’ representation of the playwright’s frequent visits to his mentally incapacitated sister, Rose, in mental hospitals.  Williams himself admitted a close identification with Fitzgerald, saying, ‘At one point I went through a deep depression and heavy drinking. And I, too, have gone through a period of eclipse in public favor… [The Fitzgeralds] embody concerns of my own, the tortures of the creative artist in a materialist society… They were so close to the edge. I understood the schizophrenia and the thwarted ambition.’” (Wikipedia)

As with so many of Williams’ later works, this play was poorly received at the time of its Broadway debut, which occurred shortly after the Washington tryouts for which this poster was created, but there is now active interest in these fascinating works.