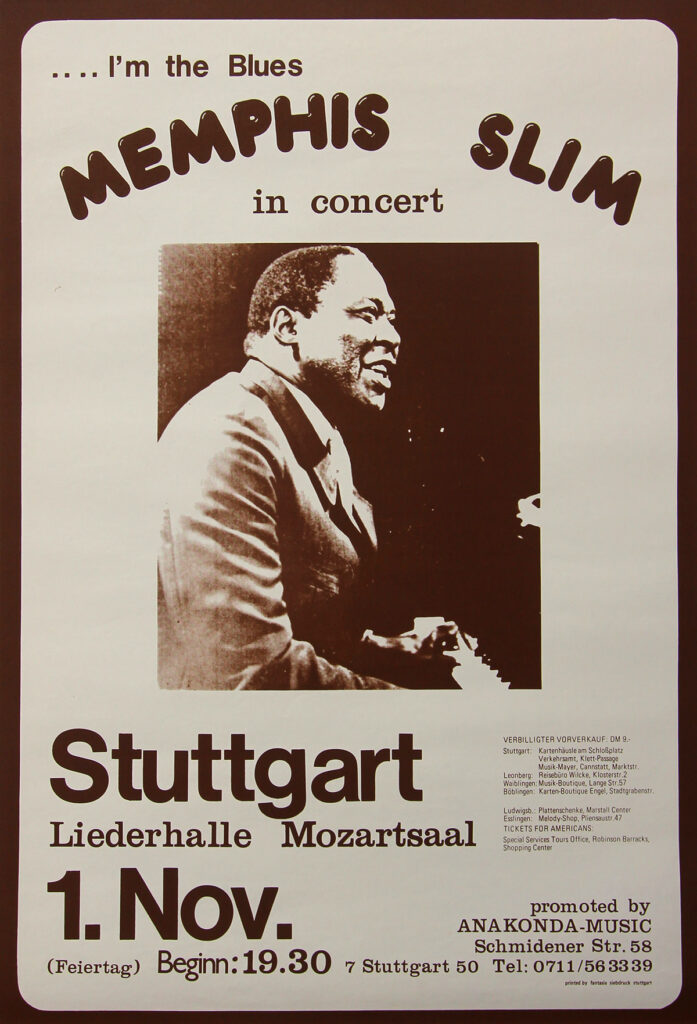 Scarce poster for a concert by blues legend Memphis Slim in what was then West Germany.

“John Len Chatman (September 3, 1915 – February 24, 1988), known professionally as Memphis Slim, was an American blues pianist, singer, and composer. He led a series of bands that, reflecting the popular appeal of jump blues, included saxophones, bass, drums, and piano. A song he first cut in 1947, ‘Every Day I Have the Blues’, has become a blues standard, recorded by many other artists. He made over 500 recordings.

“He spent most of the 1930s performing in honky-tonks, dance halls, and gambling joints in West Memphis, Arkansas, and southeast Missouri. In 1940 and 1941, he recorded two songs for Bluebird Records that became part of his repertoire for decades, ‘Beer Drinking Woman’ and ‘Grinder Man Blues’. These were released under the name ‘Memphis Slim,’ given to him by Bluebird’s producer, Lester Melrose.

“After World War II, Slim began leading bands that generally included saxophones, bass, drums, and piano, reflecting the popular appeal of jump blues. Starting in late 1945, he recorded with trios for the small Chicago-based Hy-Tone Records. With a lineup of alto saxophone, tenor sax, piano, and string bass (Willie Dixon played the instrument on the first session), he signed with the Miracle label in the fall of 1946. One of the songs recorded at the first session was the ebullient boogie ‘Rockin’ the House,’ from which his band would take its name. In 1947, the day after producing a concert by Slim, Broonzy, and Williamson at New York City’s Town Hall, the folklorist Alan Lomax brought the three musicians to the Decca Records studios and recorded with Slim on vocal and piano. Lomax presented sections of this recording on BBC Radio in the early 1950s as a documentary, The Art of the Negro, and later released an expanded version as the LP Blues in the Mississippi Night.

“After 1954, Slim did not have a steady relationship with a record company until 1958, when he signed with Vee-Jay Records. In 1959 his band, still featuring Murphy, recorded the album Memphis Slim at the Gate of the Horn, which featured a lineup of his best-known songs, including ‘Mother Earth’, ‘Gotta Find My Baby’, ‘Rockin’ the Blues’, ‘Steppin’ Out’, and ‘Slim’s Blues’.

“Slim first appeared outside the United States in 1960, touring with Willie Dixon, with whom he returned to Europe in 1962 as a featured artist in the first of the series of American Folk Festival concerts organized by Dixon, which brought many notable blues artists to Europe in the 1960s and 1970s. The duo released several albums together on Folkways Records, including Memphis Slim and Willie Dixon at the Village Gate with Pete Seeger (1962).

“In 1962, Slim moved permanently to Paris, and his engaging personality and well-honed presentation of playing, singing, and storytelling about the blues secured his position as one of the most prominent blues artists for nearly three decades. He appeared on television in numerous European countries, acted in several French films and wrote the score for À nous deux France (1970), and performed regularly in Paris, throughout Europe, and on return visits to the United States. In the last years of his life, he teamed up with the respected jazz drummer George Collier. The two toured Europe together and became friends. After Collier died in August 1987, Slim rarely appeared in public, although he reunited with Matt ‘Guitar’ Murphy for a gig at Antone’s in Austin, Texas, in 1987.

“Two years before his death, Slim was named a Commander in the Ordre des Arts et des Lettres by the Ministry of Culture of the Republic of France. In addition, the U.S. Senate honored Slim with the title of Ambassador-at-Large of Good Will.

“Memphis Slim died of renal failure on February 24, 1988, in Paris, at the age of 72. He is buried at Galilee Memorial Gardens in Memphis, Tennessee.