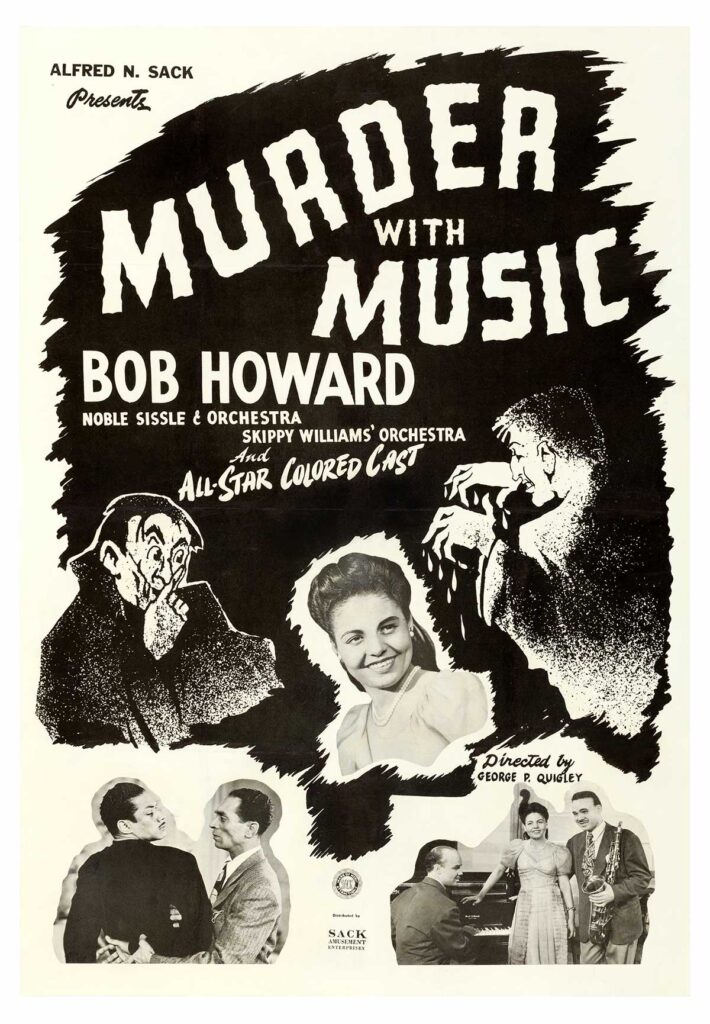 MURDER WITH MUSIC (1948) One sheet poster

An intriguing and extremely scarce poster. This appears to be a second release of a film originally titled MISTAKEN IDENTITY. Reference materials on this film alternately suggest that it was either first released in 1941 or 1944. No original advertising paper from either of those presumed earlier releases has ever surfaced—and this poster is, in fact, the only paper which this cataloguer has ever seen from any release of this film.

The normally definitive AFI online catalog is decidedly uncertain in its listing for this title:

“No contemporary information was found regarding the release date of Mistaken Identity , but it is presumed to be the early 1940s. Modern sources list the release year as 1941. The viewed print was a 1948 re-release version entitled Murder with Music . The re-released film contained added footage, additional characters and new musical numbers. The onscreen credits for Murder with Music were identical to those of Mistaken Identity, with the following exceptions: Murder with Music did not contain Arthur Leonard’s co-producer and co-director credit; John Visconti was credited as co-photographer; Gus Smith was credited, along with Victor Vicas and Norman Borisoff, for writing the screenplay; Sidney Easton and Gus Smith replaced Skippy Williams in the ‘Original Music’ credit (although Williams was credited as having written the numbers used from Mistaken Identity ). The dance team of Johnson and Johnson and Noble Sissle and His Orchestra were also added to the cast; Marjorie Oliver, as the Secretary, received an onscreen credit in the 1948 release.

“In the earlier release, Bob Brown is credited with the part of the Editor, but in the 1948 re-release he was replaced by Bob Howard in newly shot footage in which his character tells reporter ‘Ted,’ played by Milton Williams, what happened to ‘Hal.’ Howard also performed a song with the Sissle band. The cast list in the onscreen credits of the re-released version was re-ordered, with Howard’s name appearing first, followed by Nelle Hill, George Oliver, Bill Dillard, Marjorie Oliver, Ruth Cobbs, Ken Renard, Andrew Maize, Pinky Williams and Skippy Williams. Ken Renard also appeared in a brief climactic scene with Howard in the re-issue. As indicated in the credits of the re-released film, Murder with Music featured the following two additional songs and two instrumentals, all by Sidney Easton and Gus Smith: ‘Too Late Baby,’ ‘Hello Happiness,’ ‘Geeshee’ and ‘Running Around.’ “