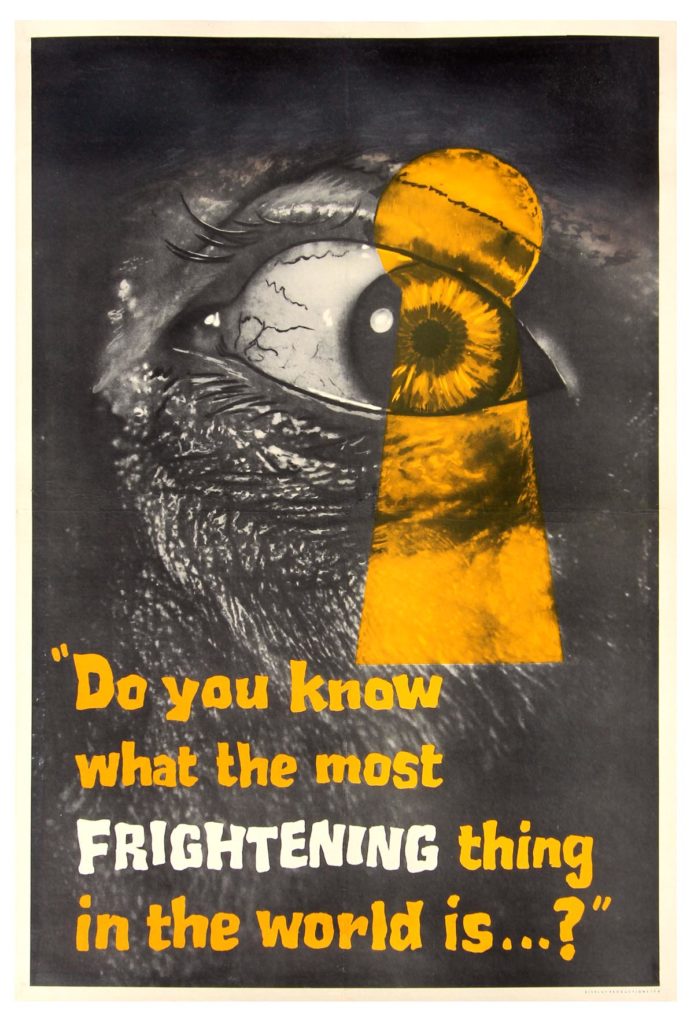 British advance teaser poster for the classic 1960 film. The British double crown format poster for the film turns up from time to time, but this advance issue — which does not state the film’s title — is an extreme rarity.

Noted director Powell’s most controversial film, about a serial killer who films his female victims as they are dying. Reviled by critics on its release and today considered a masterpiece, it is the second of three feature films the director made after parting ways with his longtime filmmaking partner Emeric Pressburger.

Ostensibly a film about a killer with serious Freudian issues, but later reassessed as much more conceptual and complex. Roger Ebert pointed out famously in his 1999 review of the film that the audience is implicated as much as the killer. “Movies make us into voyeurs. We sit in the dark, watching other people’s lives. It is the bargain the cinema strikes with us, although most films are too well-behaved to mention it…”

Martin Scorsese is probably the most famous fan of the film, and takes Ebert’s argument further, saying “I have always felt that Peeping Tom and 8 say everything that can be said about film-making, about the process of dealing with film, the objectivity and subjectivity of it and the confusion between the two. 8 captures the glamour and enjoyment of film-making, while Peeping Tom shows the aggression of it, how the camera violates. From studying them you can discover everything about people who make films, or at least people who express themselves through films.”