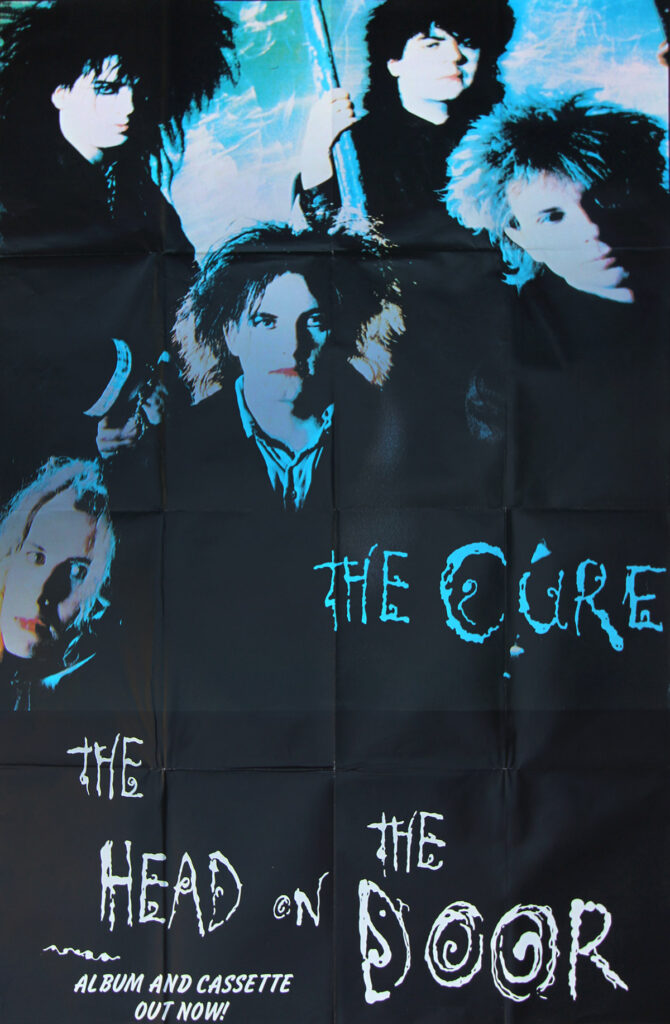 “The Head on the Door is the sixth studio album by English rock band The Cure. It was released on 26 August 1985 by Fiction Records. Preceded by the single ‘In Between Days’ which had reached No. 15 on the UK Singles Chart, The Head on the Door was described by Melody Maker as ‘a collection of pop songs’. With its variety of styles, it allowed the group to reach a wider audience in both Europe and North America. In the United Kingdom it became their most successful album to date, entering the albums chart at No. 7 on 7 September.

“The album is the first to feature drummer Boris Williams. Bassist Simon Gallup, who had previously worked on three major Cure albums of the early 1980s, was called back before the recording. In 1985 the band became a quintet with instrumentalist Porl Thompson as their fifth official member. The Head on the Door is the first Cure album where all the songs were composed solely by singer and guitarist Robert Smith.

“Released on 26 August 1985, The Head on the Door was the first big international success for the band, notably entering the top 75 in the US and reaching the top 20 in numerous other countries. The album is certified gold in the US, UK and France.

“Upon its release, The Head on the Door was well received by the British press. In a very favourable review, Melody Maker‘s Steve Sutherland hailed the ‘liberty’ that Smith took to conceive a multifaceted record. Chris Roberts of Sounds said that it ‘makes you wish more pop stars were hip enough to stay in bed all day’. Record Mirror reviewer Andy Strickland wrote that The Head on the Door ‘may lack the swirls of chorused guitar that many adore, but there’s a wider more mature musical approach’. Mat Snow of NME found that the album ‘is really quite pop’, and that ‘tunes abound’. In December 1985 it was named the best album of the year by Melody Maker.

“In a retrospective review, AllMusic critic Tim Sendra noted that The Head on the Door marked a new musical direction for the Cure in that Smith had managed to make the band’s trademark ‘gloom and doom’ style both ‘danceable and popular’; Sendra also found that the album’s ‘inventive’ arrangements provide ‘a musical depth previous efforts lacked’. Writing for Q, Tom Doyle said that songs such as ‘In Between Days’ and ‘Close to Me’ showed Smith ‘bridging the brooding of yore with their recent pop highs’. Nitsuh Abebe of Pitchfork deemed it the band’s ‘most focused pop album’ and ‘a tight, terrific package’. PopMatters included The Head on the Door on its list of 12 essential alternative rock albums from the 1980s, calling the record ‘an outstanding example of Smith’s ability to use pop music as a means to express angst while applying just a hint of the polish’.” (Wikipedia)