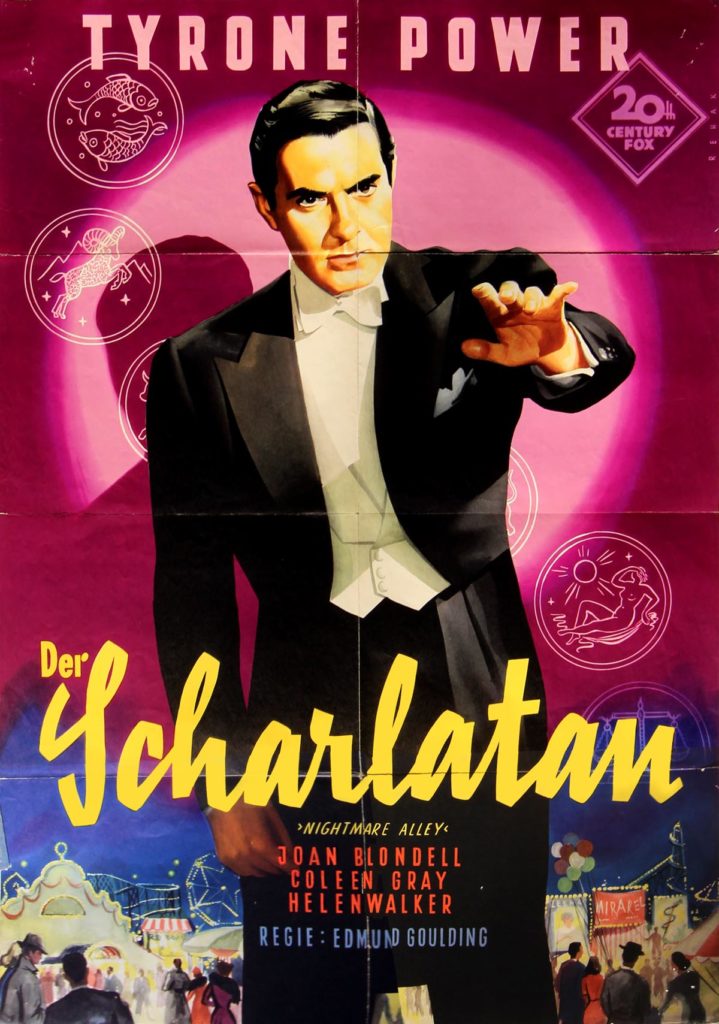 Vintage original 33 x 23″ (82 x 57 cm.) poster, Germany. Tyrone Power, Joan Blondell, Colleen Gray, Helen Walker, Ian Keith, dir: Edmund Goulding; 20th Century Fox. From a popular book of the period, and an important role for Tyrone Power as he moved from swashbuckling leading man to serious dramatic actor.
The story is about a scam carnie and his phony mentalist assistant who read people’s minds. They have the ambition to take their act from the carnival to the upscale nightclub circuit. With dark, tough characters destined for ruin, this film signaled the move to a new realism which audiences were open to accepting once World War II was behind them. Today, the film is still raw and shocking, without a happy ending. Perhaps one of the finest produced films of the noir genre.
The German poster depiction is superior to any on this title. The use of deep color, the suggestion of the world of the psychic and the carnival atmosphere of the film are all strong. An amazing portrait of Tyrone Power as well. The poster is folded and only slightly used with a few pinholes at each of the four corners, light shelf wear, very minor creasing along the very bottom and one tiny chip at the bottom near the right corner. A few tiny fold separations at the very edges, one reinforced on the verso with archival tape. Strong, bold colors. ABOUT FINE.