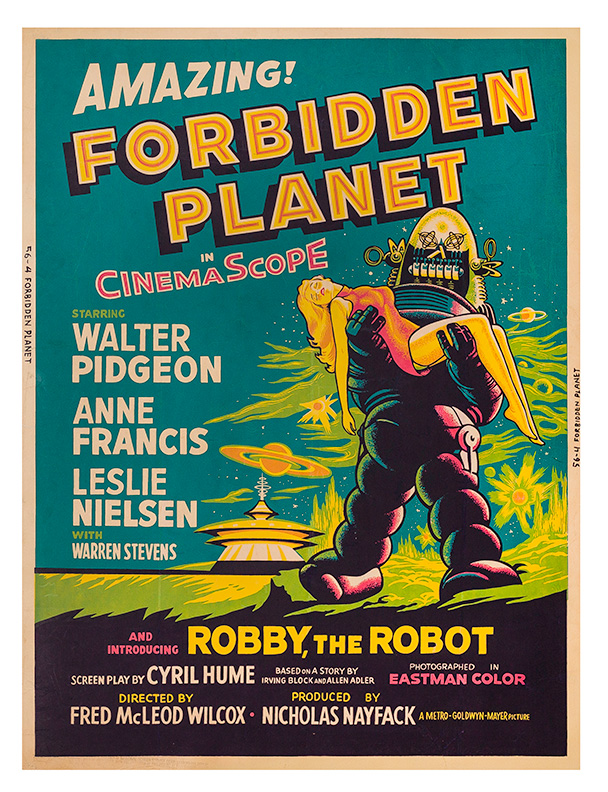 Vintage original 30 x 40″ (75 x 100 cm.) silkscreen poster, USA. Walter Pidgeon, Anne Francis, Leslie Nielsen, Warren Stevens, Jack Kelly, Richard Anderson, Earl Holliman, Robby the Robot, dir: Fred M. Wilcox; MGM. FORBIDDEN PLANET is the classic sci-fi, based on Shakespeare’s THE TEMPEST. Studio executive Dore Schary did not like the genre and was reluctant to green light production, initially only approving it for a B budget. However, legendary MGM scenic designer Cedric Gibbons decided to go all out on the production — the film cost so much that it initially lost money. Those sets and the special effects (which were nominated for an Academy Award), along with a well-written script, made it one of the best remembered and loved films of the 1950s.

Rare size poster with layout and artwork varied from other posters in the campaign. This poster was printed as a silkscreen, which gives it remarkably bright, almost fluorescent colors. Poster has been professionally backed. Creases in the blank white margins and a few inter-creases have been smoothed out with minimal touch-up. Only minor edge tears and no paper loss. Pinholes show at bottom left corner, NEAR FINE.