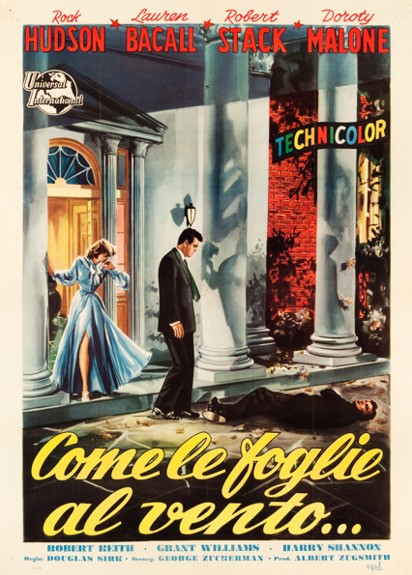 Vintage original 39 x 54” (100 x 138 cm.) due folio/2-fogli poster, Italy. Rock Hudson, Lauren Bacall, Robert Stack, Dorothy Malone, Robert Keith, Grant Williams, dir: Douglas Sirk; Universal. A big pot-boiler, but so well executed by the brilliant Douglas Sirk, it remains one of the best remembered melodramas of the 1950’s. The story of a dysfunctional wealthy oil family in Texas, the story had a basis in the murder scandal of Zachary Reynolds the son of R. J. Reynolds of the tobacco dynasty. Nominated for several Academy Awards (including supporting actor to Robert Stack for his indirect performance as homosexual Kyle Hadley), Dorothy Malone was awarded best supporting actress for her portrayal of wanton nymphomaniac Marylee Hadley, a performance in which no scenery was left un-chewed. One of the stories most dramatic scenes is depicted in which Dorothy Malone and Rock Hudson discover the dead Robert Stack. Poster is on linen. There are a few minor creases. Only a bit of touch up along the center vertical fold. ABOUT FINE.