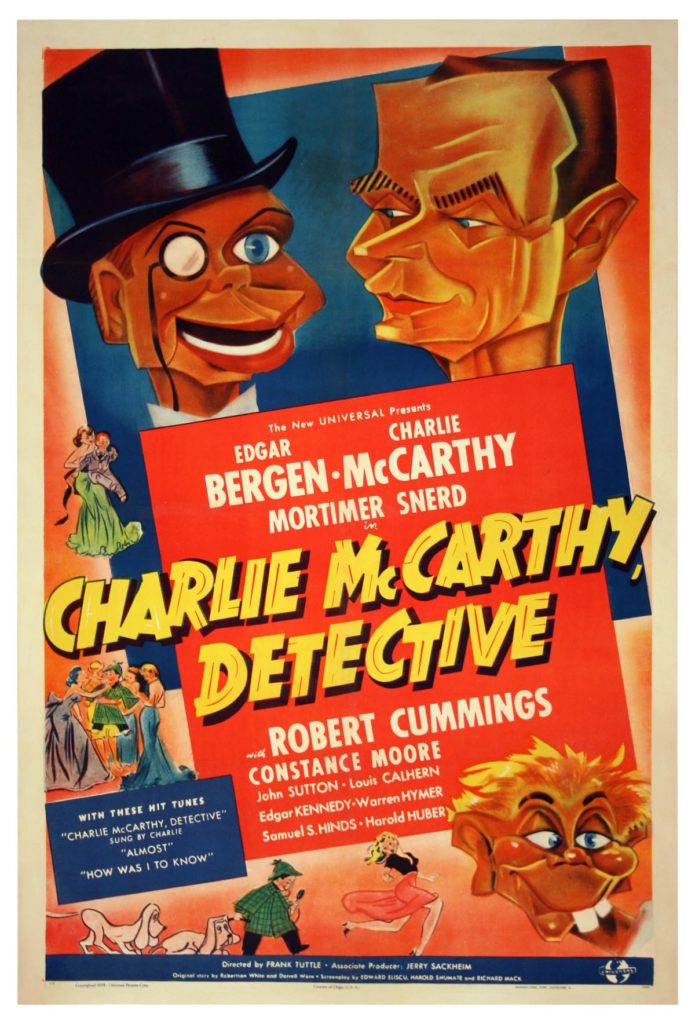 Vintage original 27 x 41 (68 x 105 cm.) one sheet poster, style B, U.S. Edgar Bergen, Charlie McCarthy, Mortimer Snerd, Robert Cummings, Constance Moore, dir: Frank Tuttle; Universal. Edgar Bergin, along with some help from (though mostly distraction) Charlie McCarthy, is brought in to solve the murder of a crooked newspaper editor who has connections to the mob. Perhaps it was the absurdity of a ventriloquist’s dummy as star, but, whatever it was, Universal was willing to go out on a limb and feature this highly unusual caricature depiction by the uniquely talented Jacques Kapralik. Kapralik’s art begins to appear in ad campaigns in the early-1930s. Much of the earlier art is more severe than what came to be known as his trademark look, mostly used in studio art for MGM films between 1939 and 1948. Rarely was his art used on a poster. This is one of the very rare cases in which it was. Mostly his caricatures were accomplished as a kind of decoupage in which he would cut out shapes from various textiles and create a 3-D sculpture, often set in a box. The color on this poster is highly saturated and this is the seldom seen “B” style (the “A” style is a routine poster, not by Kapralik). On linen, with minor touch ups to foldlines and border, NEAR FINE.