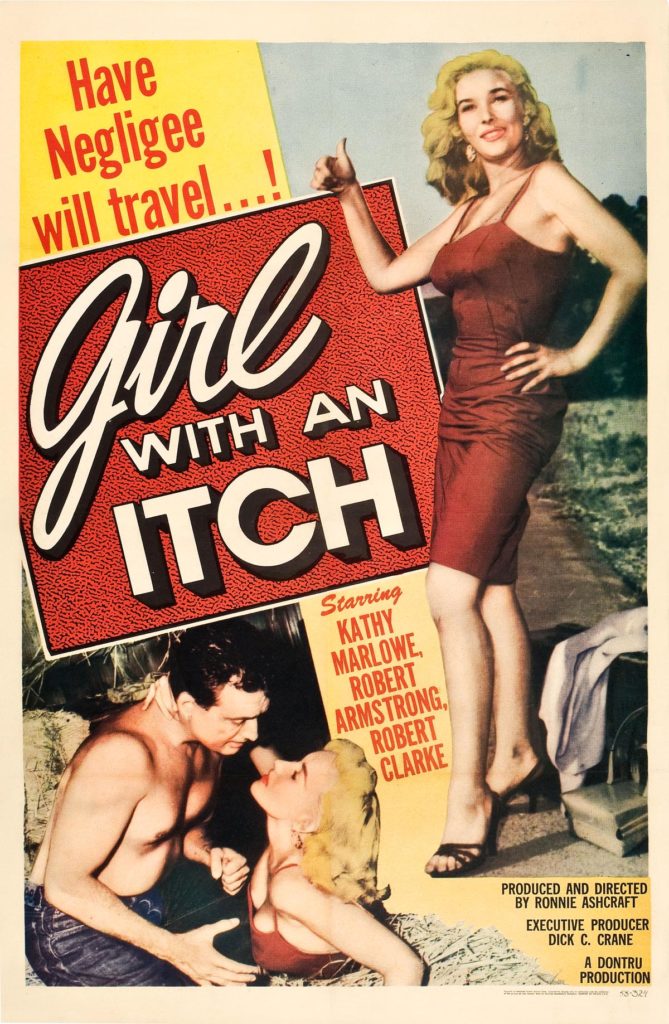 Vintage original 27 x 41″ (68 x 103 cm.) one sheet poster, USA. Kathy Marlowe, Robert Armstrong, Robert Clarke, Scott Douglas, dir: Ronald V. Ashcroft; Don-Tru Company. The story of a drifter — a sexy hitch-hiking girl (evident in this poster treatment) — who is picked up by a widowed middle-aged rancher. When she learns of this she gets ideas, but his adult son is onto her. This B film was one of the first to openly portray nymphomania. Mary Lou Waverley (played with cold calculation by Kathy Marlowe) runs the gamut from manipulated sweetness and innocence to man-eater who cannot let any man pass her by. A gold digger, a femme fatale, yes, but even more appropriately she is a girl with an itch.
Marlowe (born Kathy Maslowski in Minneapolis, Minnesota) worked her way up from bit parts as a teen starting in 1947, graduated to minor roles in A features, leads in some B films and then television roles, leaving the biz in 1961. This would be one of Robert Armstrong’s (of 1930s KING KONG fame) last film roles, though he would do TV work until 1964. Robert Clark shares a steamy moment with Kathy here. Wonderful pinup! On linen, NEAR FINE.