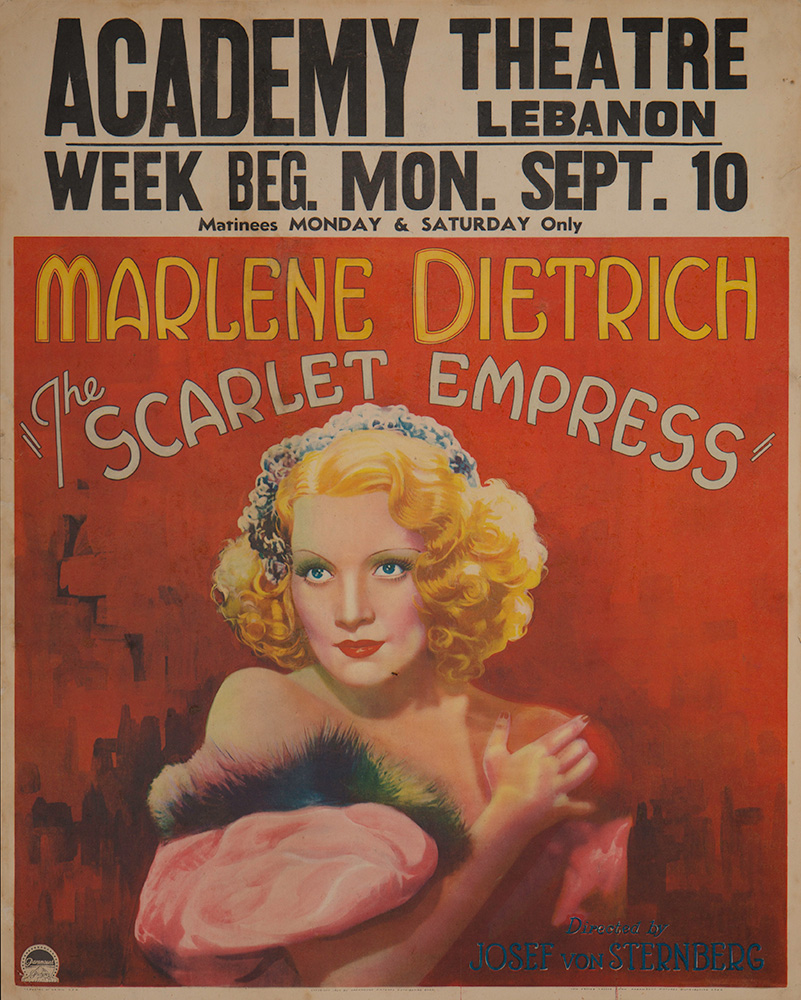 Vintage original 22 x 28” (55 x 70 cm.) jumbo window card poster, USA. Marlene Dietrich, Sam Jaffe, John Loder, C. Aubrey Smith, Gavin Gordon, dir: Josef von Sternberg; Paramount. There are creases at all four corners and normal edge wear including several tears along the left side, most have been reinforced but there are two present small tears. All of these are into the border only. Light soil to the white background in the top theatre information area. Near fine.

A beautiful portrait rendering on this poster for one of film history’s most truly bizarre movies. Perhaps this was von Sternberg’s answer for Dietrich to her great competitor Greta Garbo’s QUEEN CHRISTINA. While that film attempted to tell an accurate historical account of a historic queen, this film was a major experiment in style.

The basis was the story of Princess Sophia of Germany, who is taken to Russia to marry half-wit Grand Duke Peter (played with aplomb insanity by Jaffe). The Princess is repulsed by him, finds love with a Russian soldier, and produces a son. No one asks questions, and she moves on to become Catherine the Great.

Much of the film was silent and drenched in gothic sets, set pieces and artifice, shot through diffusion of all kinds and lit in expressionistic ways which have never been duplicated. It became an homage by von Sternberg (who was by now obsessed) to Dietrich. This showing of the film was likely for the Academy Theatre of Lebanon, PA; the theatre no longer exists.