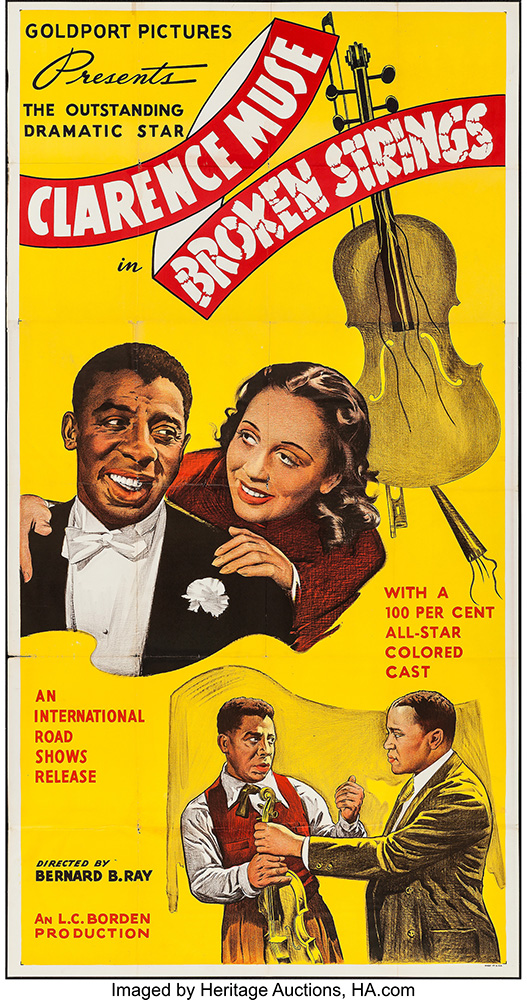 Scarce all-black cast feature film, with an interesting story line about a famous classical violinist who suffers a severe injury to his left hand, and hence loses his career. The subject is of special interest because, when the film was made, racism closed the world of classical music to African Americans, and hence the story represents a fantasy of a world which clearly did not then exist. Muse himself co-wrote the screenplay for this film, which he explicity created with the desire to refute racial stereotypes. (In an interview with The Pittsburgh Courier, he said “I simply wish to tell the truth about our race during the early days.”) This poster has a different design from the 41 x 27” one sheet poster.

Something within Muse always compelled him to hold back, to distance himself from his characters and his films, which apparently he felt uneasy with. Consequently, often enough a studied quality underlies his performances. His voice remains theatrical (enjoyably so) and he lacks the fluidity and strange ‘naturalness’ of someone like Fetchit (an actor whom Muse admired and called ‘the greatest artist in the world’).

“Yet it is still a pleasure to see Muse, mainly because he is so unlike other black actors of his era. His performances crack the glossy artificiality of his films, injecting them with a healthy dose of un-assimilated realism.” (Bogle, Donald. Blacks in American Film and Television, p. 431-432.)