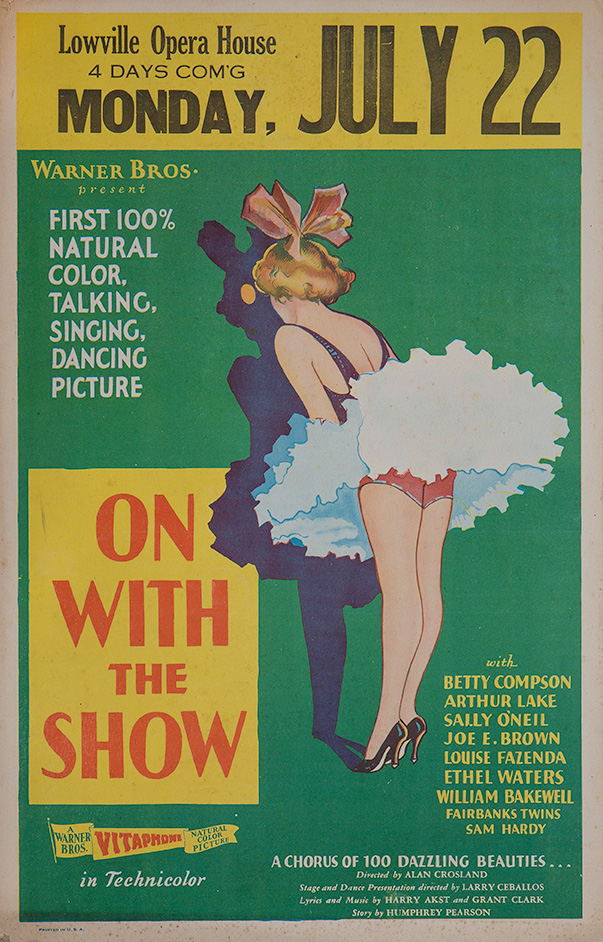 Vintage original 14 x 22” (35 x 55 cm.) window card, USA. Arthur Lake, Betty Compson, Joe E. Brown, Sally O’Neil, Louise Fazenda, William Bakewell, dir: Alan Crosland; Warner Brothers/Vitaphone. Lovely card depicting a showgirl and her shadow and promoting what Warner Bros. considered their first 100% natural color talking, singing, dancing picture. The color, which was the two-strip process was dazzling and bizarre, and far from natural. A color which even came close to depicting natural was a good ten years off, but this color with its’ intense and insane results was perfect for this early format musical. It basically was made up of the competent Warner contract players who had musical stage experience and such stage greats as Ethel Waters (singing AM I BLUE). Alan Crosland had directed what was considered the first talkie, THE JAZZ SINGER just two year before and the techniques involved in making sound films had improved greatly. The Lowville Opera house in mid New York State had just added sound equipment to their theatre in May 1929 and this and other early talkies were a big event. Opened in 1926, the theatre was demolished in the 1990s. Creases at corners and spotting along the bottom white margin. NEAR FINE.