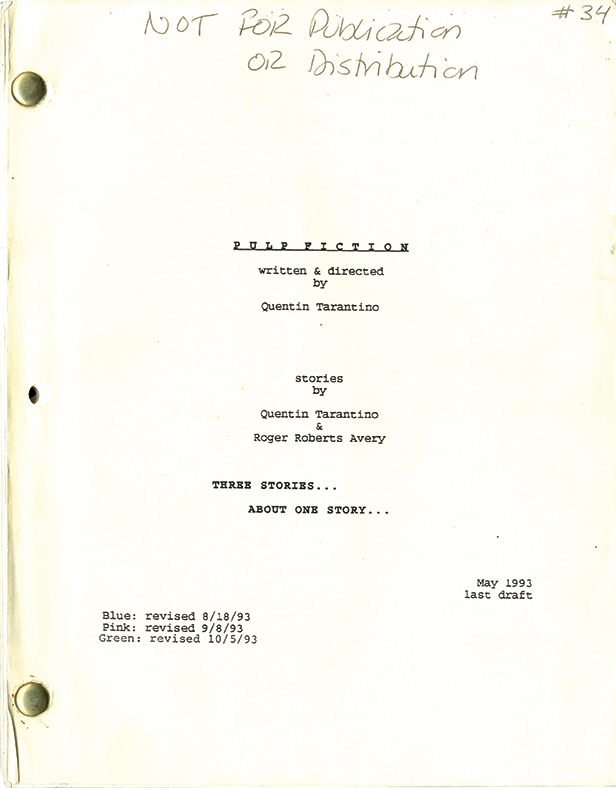 PULP FICTION was the second feature film written and directed by Quentin Tarantino (born Knoxville, Tennessee, March 27, 1963), following his 1992 debut film, RESERVOIR DOGS, and it was his first great success.

The screenplay and film are celebrated for their innovative narrative structure, interweaving three interrelated principal stories – “Vincent Vega and Marsellus Wallace’s Wife”, “The Gold Watch”, and “The Bonnie Situation” – and a framing story, “The Diner”, which are presented in non-linear order so that, for example, a hitman named Vincent Vega, who is killed in Story No. 2, reappears in Story No. 3 and in the framing story that opens and closes the narrative.

PULP FICTION is equally celebrated for its colorful characterizations and clever dialogue (in many ways inspired by the films of Howard Hawks), and its usage of Los Angeles locations, principally the San Fernando Valley. It is a crime film, reminiscent in some ways of Robert Siodmak’s 1946 film noir, THE KILLERS, among many other cinematic influences, and has been called both “post-modern” and “neo-noir.”

Notwithstanding the convolutions of its plot and non-linear timeline, PULP FICTION can be described simply as a film about two L.A. hitmen (John Travolta and Samuel L. Jackson), an aging boxer (Bruce Willis), a crime boss (Ving Rhames), and the crime boss’ wife (Uma Thurman). At the time of its release, the movie was considered groundbreaking for its racial diversity. One of the two hitmen (Jackson) was black and given the same weight in the narrative as his white partner (Travolta). The marriage between the mob boss (Rhames) and his wife (Thurman) was interracial. A minor white character named Jimmie (played by Tarantino himself) is married to a nurse who happens to be black. Jackson’s performance as the hitman, Jules Winnfield, established him as a major star. Travolta’s performance as the other hitman, Vincent Vega, was a “comeback” role that revitalized the veteran actor’s career.

Tarantino’s “last draft” screenplay is essentially the movie’s shooting script. In many of its sequences, e.g., the opening diner scene, the dialogue on the page and the dialogue spoken on screen is virtually identical. The principal difference between the screenplay and the completed movie is that the screenplay contains some sequences – a scene where Mia Wallace (Thurman) interviews Vincent Vega (Travolta) with a hand-held video camera, a scene at the auto demolition junkyard of “Monster Joe” (Dick Miller), a monologue by Lance the heroin dealer (Eric Stoltz) – that do not appear in the completed film. Other scenes, for example, a scene between the boxer Butch and a Latina cab driver, have substantially more dialogue than in the completed movie. However, all of these scenes – the omitted ones, and the scenes with additional dialogue – were shot as they were scripted and, though omitted from the completed film, can be seen as extras on the film’s DVDs and Blu-rays.

The scenes that were modified the most between the “last draft” script and filming were those involving Vincent (Travolta) and Mia (Thurman), particularly their “big date” at the 50s retro café, Jackrabbit Slim’s. The crime boss, Marsellus, busy with other matters, has asked Vincent to chaperone his wife, Mia, for a night on the town.

Look, I’m not an idiot. She’s the big man’s fuckin’ wife. I’m gonna sit across a table, chew my food with my mouth closed, laugh at her jokes and that’s all I’m gonna do.

In the scene where Vincent arrives at Mia’s home to pick her up, we are not meant to se her face. In the screenplay, she is getting dressed “naked with her back to us” and “talks to Vincent through a crack in the door”, telling him to fix himself a drink. The movie, as shot, adopts a far more elaborate strategy to conceal Mia’s face – she observes Vincent through a series of security cameras that show him to her on a bank of television screens, and talks to him over an intercom – we see only her red lips speaking into a microphone.

The scene at the Jackrabbit Slim’s café is also more elaborate. Both versions, script and film, end with Vincent and Mia dancing the twist. In the script, Mia simply says, “I wanna dance”, and they do so, along with the other customers. In the movie, a waiter dressed and talking like 50s variety host Ed Sullivan announces a twist contest, while a waitress costumed as Marilyn Monroe holds up a trophy that will be awarded to the winning couple. Vincent and Mia consequently twist alone, and in the following scene we see Mia carrying home the trophy they won. It is one of the film’s most fondly remembered set pieces.

One of PULP FICTION’s most Hawksian aspects is a character named Winston Wolfe (played by Harvey Keitel) who is a professional fixer. Even his name invokes Howard Hawks. (Wolf = hawk, both predators. The double W initials of Winston Wolfe echoes the double H of Howard Hawks.) He arrives during the third story, “The Bonnie Situation”, to help Vincent and Jules clean up their car and themselves after a gun accidentally goes off and kills a passenger in the back seat, splattering blood everywhere. The way Wolfe handles the situation embodies professionalism, a Hawksian ideal. The mixture of comedy and shocking violence throughout the film is also reminiscent of Hawks, particularly his 1932 SCARFACE, along with the characters’ non-stop banter. The dialogue between Vincent and Mia may remind the viewer of Bogart and Bacall in Hawks’ TO HAVE AND HAVE NOT and THE BIG SLEEP. However, PULP FICTION’s innovative narrative structure is the opposite of Hawks’ classicism, and the film’s spiritual subtext – the idea of redemption – has nothing in common with the agnostic world view of Hawks, invoking instead the Catholic world view of directors like Rossellini, Leone, and Hitchcock.

Brimming with unforgettable dialogue, vitality, and inventiveness, PULP FICTION is arguably the best – certainly the most influential and iconic – American screenplay and film of the 1990s.