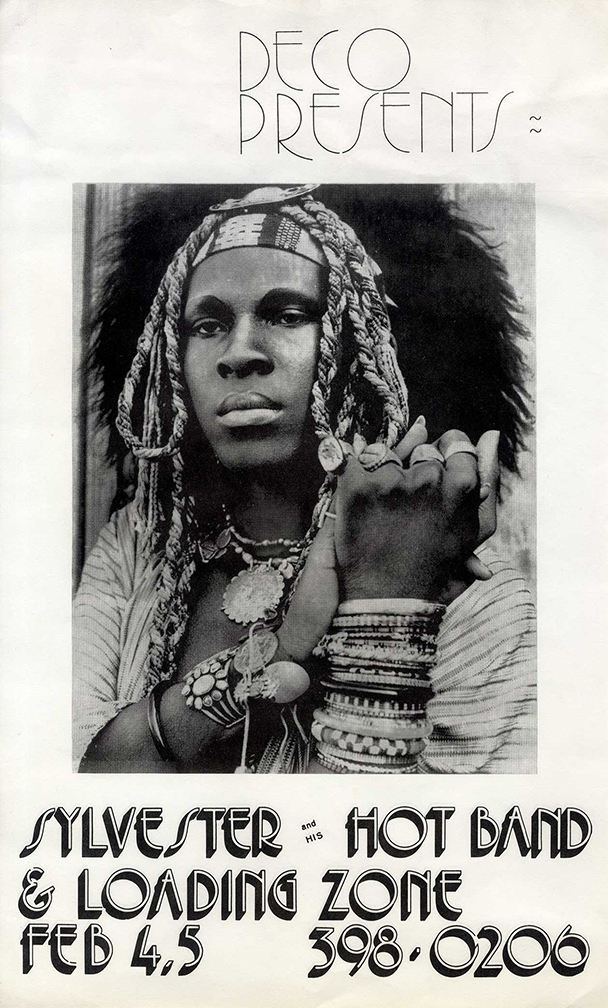 One of the earliest pieces documenting the legendary Sylvester’s career.  He moved to San Francisco in 1970, where he joined forces with the radical queer counterculture collective known to history as the Cockettes. He immediately gained attention for the splendor and subtlety of his falsetto singing voice.

“Although a significant member of the troupe, Sylvester remained a relatively isolated figure; not only was he one of very few African-American members, he eschewed the group’s more surrealist activities for what he saw as classier, more glamorous performances onstage. In the Cockettes’ performances, he was usually given an entire scene to himself, often with little relevance to the narrative and theme of the rest of the show, although through doing so, he gained his own following.

“With a piano player named Peter Mintum, Sylvester worked on solo scenes in which he exhibited his interest in blues and jazz by imitating several of his musical idols like Billie Holiday and Josephine Baker. Adding to his image, Sylvester used the pseudonym ‘Ruby Blue’ and described himself as ‘Billie Holiday’s cousin once removed.’ Fascinated by black musical heritage, he read up on the subject and became a collector of ‘negrobilia’; in some of his Cockette performances, he played up to racial stereotypes of African-Americans in order to ridicule the stereotypes themselves.” (Wikipedia)

Although Sylvester also appeared in various of the Cockette’s theatrical events, he split permanently from them in late 1971.

This flyer can be dated precisely to 1971 because the opening act listed on the bill (a San Francisco band known as The Loading Zone) disbanded later in 1971.