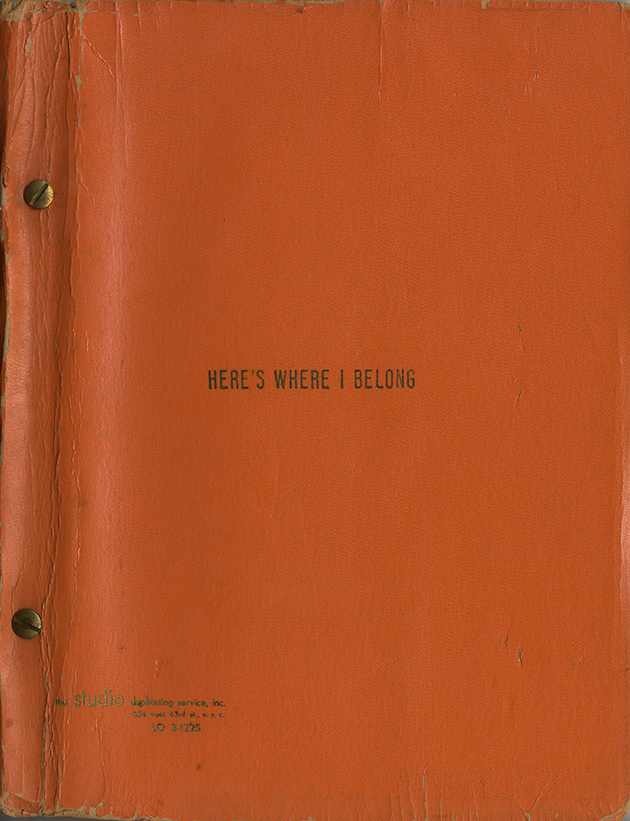 Vintage original script. Quarto. Leatherette wrappers, brad bound, mimeograph, 70, 39 pp. Covers show heavy vertical creasing near spinhe, and some light wear at extremities. Title page has signature of actor Ken Kercheval, who played the important role of Aron Trask. There are numerous circlings, underlinings and some manuscript notes in his hand, generally notes about his interpretation of the part.(For instance, on page 31 (which is in Act I, scene 5), he writes “How does he change when he starts in on personal things.” NEAR FINE in VERY GOOD+ wrappers.

P;aybill, about 50 pp., pictorial wrappers, near fine, with a clipping laid in with negative review of the play, NEAR FINE.

Five sheets of original music from the 1968 Broadway musical. Included in the set is the music for the songs “Here is Where I Belong,” “We’re a Home,” “Waking-Up Sun,” “No Time is a Good Goodbye,” and “Soft is the Sparrow.” NEAR FINE with light toning overall and some light wear to the margins.

Based on John Steinbeck’s novel “East of Eden,” following the tale of two families and their venture west. The musical opened on Broadway at the Billy Rose Theatre on March 3, 1968. It closed after one performance and twenty previews.

This was a very early work by Terrence McNally, who contributed the book, along with Robert Waldman (music) and Alfred Uhry (lyrics)., and one of about five different theatrical adaptations of Steinbeck to reach Broadway. This musical was, obviously, very poorly received when it opened in 1968, but, considering the very important talents who created it, one wonders if a modern revival of it might be appropriate. In any case, this is a very interesting, otherwise unpublished, part of the canon of Steinbeck adaptations.