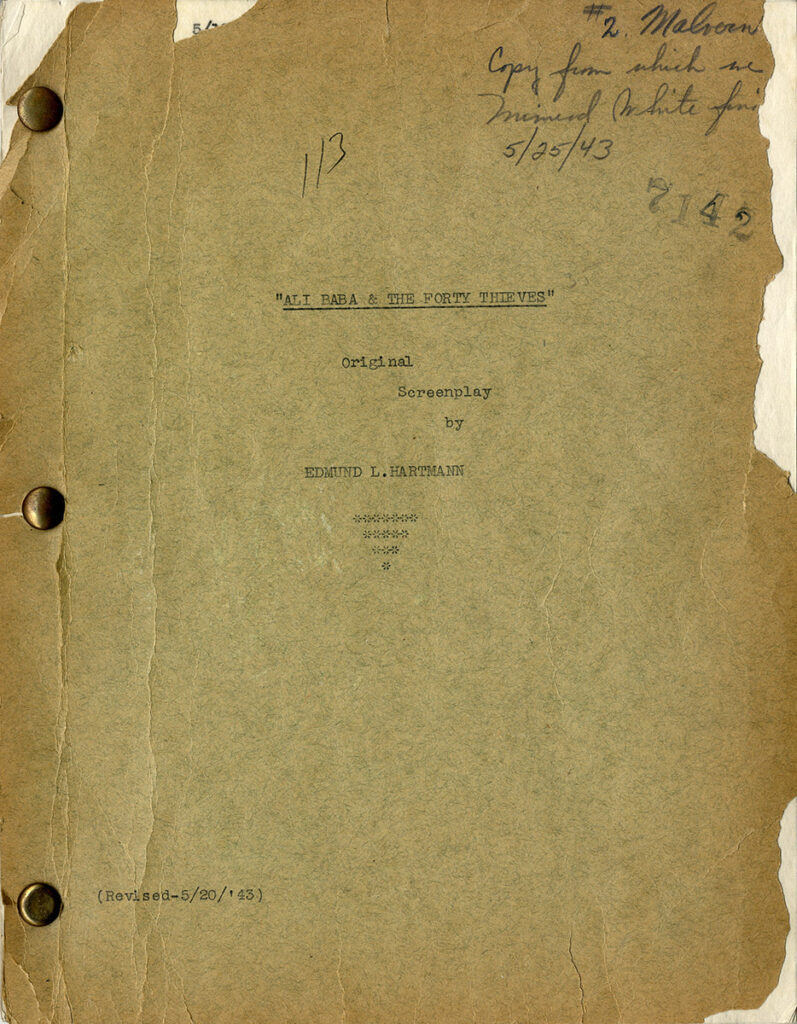 ALI BABA AND THE FORTY THIEVES (May 20, 1943) Revised Screenplay by Edmund L. Hartmann

Call it Exotica, call it Orientalism, ALI BABA AND THE FORTY THIEVES (Arthur Lubin, 1944) was the third in a quartet of Technicolor extravaganzas produced by Universal Pictures in the 1940s starring Jon Hall, Maria Montez, and either Sabu or, in this particular case, Turhan Bey. The other films in the series were ARABIAN NIGHTS (John Rawlins, 1942), WHITE SAVAGE (Arthur Lubin, 1943), and COBRA WOMAN (Robert Siodmak, 1944). These movies were Universal’s response to the success of the Alexander Korda mega-production, THE THIEF OF BAGDAD (Michael Powell, Ludwig Berger, et al., 1940) which starred Sabu.

The leading actors of these films were indeed exotic by Hollywood standards. Maria Montez was born in Barahona, Dominican Republic in 1912; she was known as “the Dominican bombshell”. Jon Hall, born in Fresno, California in 1915, was the son of a Tahitian princess and was raised in Tahiti. Turhan Bey, born in 1922, was an Austrian-born actor of Turkish and Czech-Jewish origins. Teen actor, Sabu, was born in 1924 in India.

Edmund L. Hartmann’s screenplay for ALI BABA AND THE FORTY THIEVES was loosely based on the story of that name from One Thousand and One Nights aka The Arabian Nights. However, the only things it takes from that story, apart from its title, are a character named Ali Baba, the forty thieves, and a cave filled with stolen treasure whose doors magically open when someone utters the words, “Open Sesame”. Otherwise there are no fantasy elements in this screenplay — no genies, giant monsters, flying carpets, or magic lamps. Viewers expecting a pure escapist fantasy might be surprised to see how topically Hartmann’s screenplay reflects the events of its day, specifically the Nazi occupation of Europe. The story begins with the Mongol conquest of the city of Baghdad, and the remainder of the movie is about how Ali Baba (Jon Hall), the son of Baghdad’s murdered caliph, and his allies, the forty thieves, recapture the city. The Mongols are clearly surrogates for the Nazis, Baghdad stands for France, Czechoslavakia, and all the other countries occupied by the Germans, while Ali Baba and his allies represent the Resistance. The film reserves its greatest animus for the character of Cassim (Frank Puglia), a Prince of Baghdad who collaborates with the Mongol occupiers.

There is also a romantic subplot. At the beginning of the story, we see Ali and Prince Cassim’s daughter, Amara, as children, pledging to love each other for life. In the movie, they grow up to be Jon Hall and Maria Montez. However, when adult Ali secretly returns to Baghdad as leader of the forty thieves, Amara is about to be married to the Mongol leader, Hulagu Khan, and the two former childhood sweethearts do not recognize each other. Needless to say, things eventually work out.

The director of ALI BABA, Arthur Lubin (born Arthur Lubovsky, 1898-1995), was a proficient and entertaining filmmaker whose extensive resume included crime films (PRISON BREAK, 1938), horror films (PHANTOM OF THE OPERA, 1943), film noirs (IMPACT, 1949), and five Abbott & Costello comedies, starting with BUCK PRIVATES (1941), the team’s first big hit. Lubin’s specialty, however, was lighthearted fantasy. He directed the Francis the Talking Mule series, starting with FRANCIS (1950), and made RHUBARB (1951), about a cat who inherits a baseball team. He was known for creating the talking-horse TV series, MISTER ED (1962-1966). In 1961, Lubin returned to Orientalist fantasy with the third movie version of THIEF OF BAGDAD, starring Steve Reeves and co-directed by special effects master Mario Bava, arguably his best film; however, some might award that title to THE INCREDIBLE MR. LIMPET (1964), starring comic actor Don Knotts as a man who transforms into a talking cartoon fish.

There are a few minor differences between Hartmann’s screenplay and what was ultimately filmed. The filmmakers decided to omit a framing sequence taking place in a Baghdad marketplace in which a “Storyteller” introduces the tale (“Gather ye True Believers! Hear a tale of wonder and magnificence — never before related to the good citizens of Bagdad!”). Zura, whom the script indicates was to be played by Maria Montez, is renamed Amara in the film. Her loyal bodyguard, Jamiel, whom the script indicates was to be played by Sabu, is played by Turhan Bey in the movie (Sabu was serving in the military at the time), and since Bey was not as big a star as Sabu, his part in the story was somewhat reduced.

ALI BABA AND THE FORTY THIEVES is an unqualified success, and clearly an at least minor classic fantasy film of the 1940s.