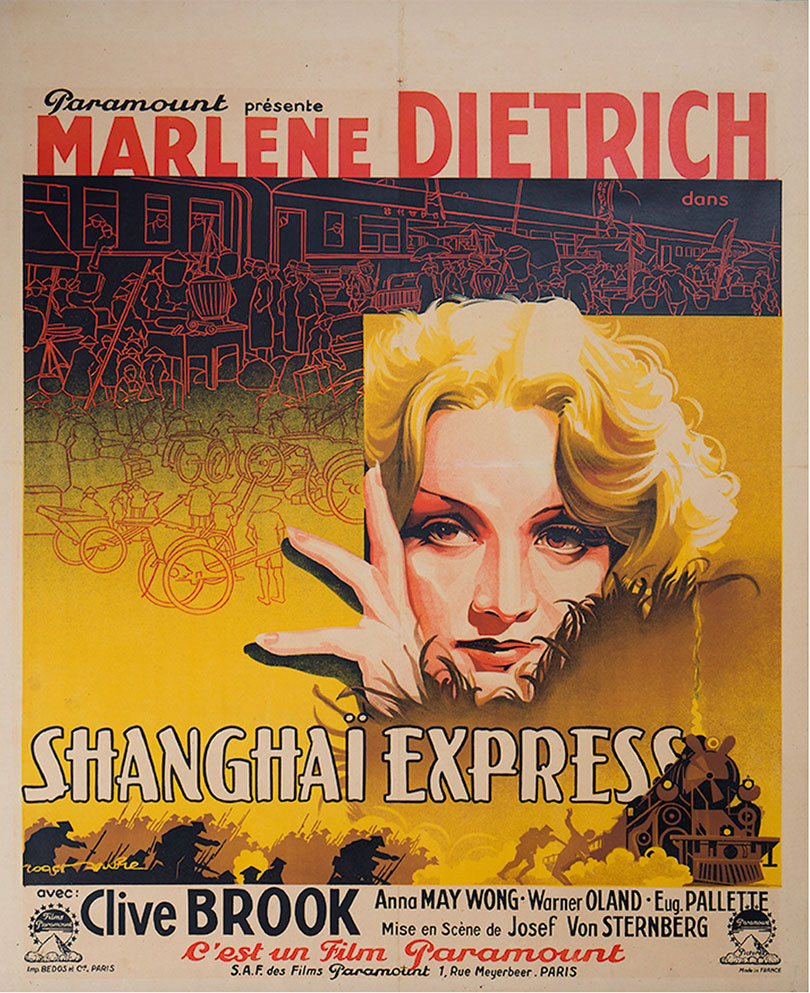 1930s movie posters proclaimed, week after week, what Hollywood had to offer to an eager world during the days of the great movie studios and the Great Depression. No better example of this is the above exquisite 1932 vintage original Belgian poster of Marlene Dietrich in Shanghai Express.

In the beginning, as the fledgling studios began to grow, and knowing that a portion of their potential audience was illiterate, they took their cue from vaudeville, fairs and the circus to create colorful artwork that depicted scenes from their movies in order to promote their films.

From the mid 1920s through the 1940’s, movie studios developed their own artwork styles for their posters, lobby cards and other marketing materials. They hired well-known artists and illustrators, such as Al Hirschfeld, John Held Jr., Hap Hadley, Ted Ireland, Louis Fancher, Clayton Knight and Armando Seguso, to create the illustrations and graphic designs.

The introduction of the color offset lithography printing technique in the 1920’s changed the artistic quality of posters, sharpening the image and, over time, shifting the emphasis from illustration to photography.

At the same time, Hollywood Portrait Photography evolved as a result of the work of six individuals that became the photographers of choice for “shooting the stars:” Albert Witzel, George Hurrell, Clarence Bull, Ruth Harriet Louise, Milton Greene and Cecil Beaton.

The 1930s ushered in what is now known as the “Golden Age of Movies”. This was the birth of the great Hollywood musicals, legendary gangster films and even popular horror movies. Many would later say that some of the greatest movies of all time were made during the 1930s. This culminated in 1939 with one of the biggest money makers in film history, the legendary Gone With The Wind.

What is known as Art Deco was very popular at this time. It used geometrical designs and very bold colors and many of the 1930s movie posters, as well as the architecture of motion picture theaters themselves, reflected this esthetic.

One very noticeable change was the elimination of detailed backgrounds, shifting instead to blank white or colored spaces, bolder typographic with a growing focus on main characters – the stars of the film, particularly their faces, over depictions of scenes.

As far as studio “branding” was concerned, when it came to their respective poster designs, only MGM and Warner Brothers developed a kind of “brand” in the mid/late 1930s that carried through to the end of the 1940s.  MGM often had a white background, a bold title, a portrait art depiction or photograph of the star or two lead stars, and then often a duo tone photo image towards the bottom of the poster. Warner Brothers, after 1938, started doing posters that were basically large duo tone portraits of the stars and little else except for a “pulled from the headline” style of typography.

The other studios were all over the place. Fox/Twentieth Century Fox seemed to have a look from early/mid 30s through WWII that was saturated color art (rarely photography) on their posters. RKO and Columbia also had richly colored art depictions throughout the 1930s and into the early 40s.

With the 1930s came the Great Depression. Many feared that movies would suffer during this time because people would not want to spend money on tickets. The exact opposite happened. The Depression made people want to escape reality, and movies became even more popular and the movie poster continue to grow to become an art form in itself.

Should you like to view or are interested in collecting one of the above posters or any of our other posters, please…