Bette Davis and Joan Crawford’s feuding and fighting relationship in the wonderfully entertaining FX Television mini-series FEUD from producer Ryan Murphy has sparked a renewed interest in the lives and work of these legendary stars of the silver screen.  It’s this interest that convinced us to focus our attention on these two extraordinary women and put together a fabulous collection of their images and artifacts as the Current Exhibit of our new website, WalterFilm.com.

Joan Crawford was the ultimate movie star, she was created by the movie system, her personality cultivated and talent trained. She learned her craft during the later days of silent movies and was fortunate to become an even bigger star in talking films.

Davis was a consummate actress, theatre trained, her talent used to great advantage in early talkies, her attention to her craft and dedication to her work making her one of the biggest stars of the 1930s.

Their different approaches to film acting may have been at odds with each other, but, being under contract to different studios, they had little reason for rivalry.  Their feud, as it has come to be known, however, did start this early.

The Man Who Got Away

Franchot Tone was the reason.  Under contract to MGM, he had already made 4 of 7 films with Joan Crawford before being loaned to Warner Brothers for the 1935 DANGEROUS with Bette Davis.  He and Crawford were having a passionate affair, but Bette fell for him. Davis and Tone were both from East Coast families, with sensibilities to match.  Tone was also theatre trained and serious about acting.  He, however .was smitten with Crawford and soon after finishing DANGEROUS, they married.  Crawford was aware of Davis’ crush and Davis never forgave Crawford for marrying Franchot Tone.

Too Many Stars On The Warner Brothers Lot

What truly cemented the two stars’ dislike of each other was Joan Crawford’s move to a Warner Brothers in 1944 following the end of her 18 years with MGM in 1943.  Bette was Warner Brother’s reigning female star.  She won the Academy Award for Best Actress twice, for 1935 and 1938.  Between 1939 and 1945, she was nominated 6 more times. The awards and nominations were important. 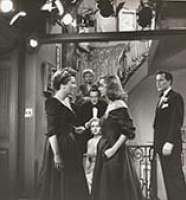 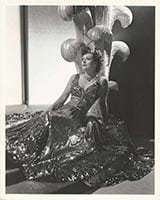 They now were in competition, and Crawford soon won an Academy Award for her first Warner Brother’s starring role, that of Mildred in MILDRED PIERCE.  Crawford’s star rose once again in Hollywood with her career resurgence while Davis’ roles became less invigorating and her position less prominent at Warner Brothers.  Crawford would even be nominated again in 1947.

Upon Davis leaving her alma mater after17 years, she sailed gloriously back to the top of the industry in 1950 with ALL ABOUT EVE, earning yet another Academy Award nomination.

Both stars proved to be aggressive and re-invented their images as they moved through their 40’s during the 1950s, Joan playing the glamorous cougar and Bette moving into character roles. They both would compete for 1952’s Academy Award for Best Actress. Fortunately, Shirley Booth won.  By the end of the decade they had passed their 50th nirthdays. Many of the star actresses of their class had either moved into character roles, television or left the business. While Crawford chose to retire, Davis kept busy in quality low budget films, television, and in theatre.

Whatever Happened To Baby Jane 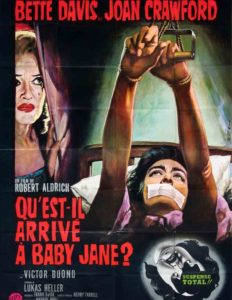 The sudden death of Joan Crawford’s  husband of three years, Alfred Steele, put her back in the market for work.  She indeed found the book WHATEVER HAPPENED TO BABY JANE, and wanted to work with Davis, knowing that the story would work brilliantly with the two of them.  It did.

There was tension, there were problems.  They have been well documented, but both looked at this film as their new lease on a career.  Both were aware that an Academy Award, for them, meant a new lease on superior projects.  To Bette Davis, the Academy Award meant, perhaps more to her than any other star of her generation.  She put great stock in it.

She was nominated for Best Actress, Crawford was not nominated at all.  This was the huge breaking point.   Crawford seemingly purposely campaigned against Davis and commanded the backstage of the Awards ceremony with her own party, having finagled her position as presenter that night.  When Anne Bancroft won, Crawford went on stage to accept for her.

The huge success of WHATEVER HAPPENED TO BABY JANE gave both stars a new genre of film to excel in.  Soon some of their friends and contemporaries did films in the same horror genre.  Of course audiences looked forward to a re-teaming of Crawford and Davis.  Initially Bette Davis, seemingly putting aside her bad feelings towards Crawford relented in the reteaming for HUSH… HUSH SWEET CHARLOTTE. Though Crawford finished several scenes in a very professional manner, which Davis appreciated her for, a long delay occurred due to Crawford’s supposed illness.  After that, Davis no longer had any patience and Crawford was no longer doing her job.  She was fired and replaced by Olivia de Havilland.

Whatever Happened After Baby Jane

Crawford would continue in the horror style genre through 1970.  Bette would live and work longer, making films till 1989.   Neither had much to do with each other, but both would often, when asked about the other be polite and diplomatic and express genuine appreciation for each other’s professionalism and talent.

In the end, they were two highly competitive, aggressive career women who fought to keep working, fought and pioneered for women in the industry and perhaps were more alike in many ways than either would have ever admitted.  They at least were able to appreciate each other for those positive contributions each made to the industry.

Please visit our Current Exhibition honoring Joan Crawford and Bette Davis and enjoy the many images and artifacts that cover their colorful careers.