These two vintage original lobby cards from THE CABINET OF DR. CALIGARI (1920), show the extraordinary detail and design that went into the visual creation of what is considered the quintessential work of German Expressionist cinema. As described by the film critic, Roger Ebert, in his review:

The first thing everyone notices and best remembers is the film’s bizarre look. The actors inhabit a jagged landscape of sharp angles and tilted walls and windows, staircases climbing crazy diagonals, trees with spiky leaves, grass that looks like knives. These radical distortions immediately set the film apart from all earlier ones, which were based on the camera’s innate tendency to record reality. “Caligari” is said to be the first example in cinema of German Expressionism, a visual style in which not only the characters but the world itself is out of joint.

A case can be made that “Caligari” was the first true horror film. There had been earlier ghost stories and the eerie serial “Fantomas” made in 1913-14, but their characters were inhabiting a recognizable world. “Caligari” creates a mindscape, a subjective psychological fantasy. In this world, unspeakable horror becomes possible.

The 1920s were the decade that saw the rise of the Dada and Surrealist movements. The first rejected all pretense, all standards, all sincerity. It was a profound expression of hopelessness and alienation. It led to the rise of the related art movement Surrealism, which cut loose from order and propriety, rejected common values, scorned tradition and sought to overthrow society with anarchy. 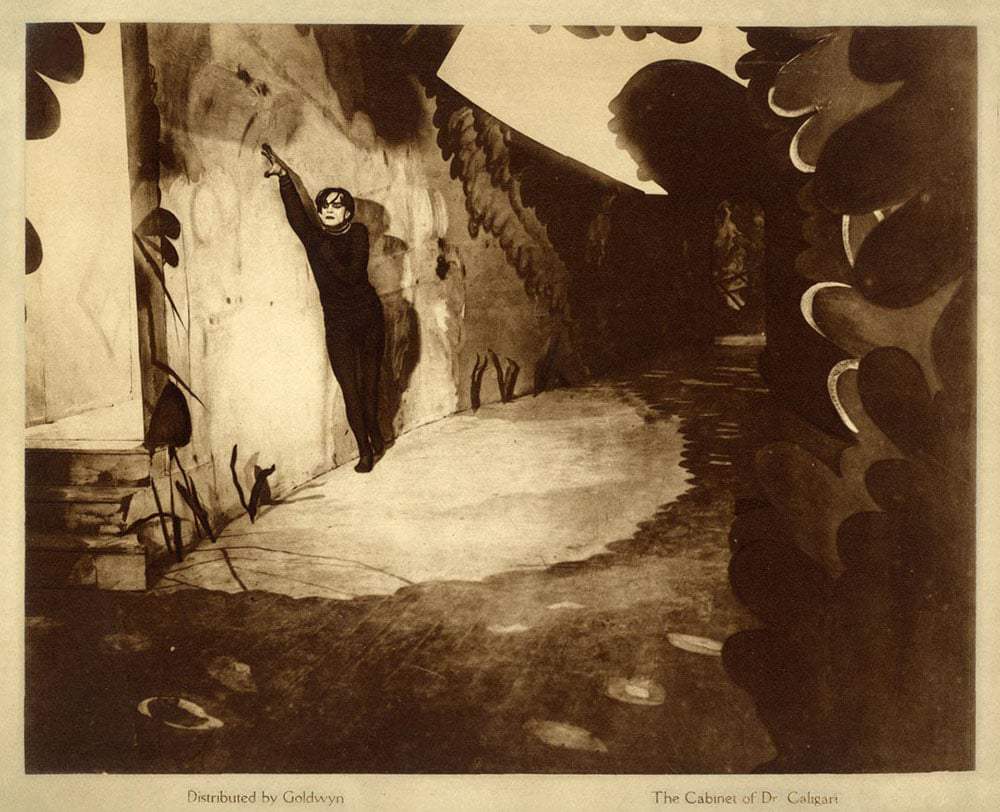 In Jeff Saporito’s October 30, 2015 article, Why is “The Cabinet Of Dr. Caligari” Considered the Definitive German Expressionist Film? He elaborates on its significant artistic connection with the following:

Its horror shot within the bosom of an artistic combination that brings to mind Edvard Munch, MC Escher and Picasso, but lives on as definitively Caligari. After nearly 100 years, its twisted and bizarre visual style is unmatched, positioning the film as a staple in film history studies and examinations of early cinematic pioneers.

These two extremely rare, vintage original lobby cards are not just pieces of movie memorabilia or advertisements for a film; they are, in themselves, historic and significant works of art that capture a time and a movement and the film they depict is “likely to be explored in academia and privately for generations to come as one of the major influencers in the establishment of early cinema.”