Collecting vintage original film scripts, movie scripts or screenplays (however you choose to call them) can not only be a fascinating study in the production of motion pictures but the act of collecting last century’s contribution to a major art form and a unique form of literature.

Film scripts come in many formats and each genesis of script is a look into the process from page to screen.

What Is A Film Script?

The film script, whether based on a book, play, magazine story, news headlines or an original story is the blueprint by which the film is made.  It is what each of the artists involved in production studies in order to do their part in bringing a film to fruition.

From Synopsis to Shooting Script

There are often many drafts of a script— starting with a synopsis of what the story is to be based on, whether it be an existing or original source. In the great days of the studio system, writers would be assigned to take the synopsis and turn it into a format which could be filmed.  Often a script would go through many writers, many drafts and would take several years before what was called the “shooting script” was realized. Often this process required a number of drafts, often written by a variety of writers.

These various drafts would be printed up in limited quantity and distributed only to those artists assigned to the production.  These scripts are integral in understanding how a film came to be and are indeed rare in the collector’s market.

To understand the genesis of a film, one would need to study each of the script drafts in order of the date they were written.  Books and documentaries have relied on the study of various drafts in order to tell the history of a classic motion picture.

Also desirable are the scripts marked as FINAL SHOOTING SCRIPT.  In most cases, this represents pretty much what was filmed. In these we find the scenes which were deleted for reasons of censorship or length, or in that they just did not work. We often find the stills taken of those excised scenes (and in rare cases, the cut footage) which visualize what is missing from the final film. These shooting scripts too are rare as they were only printed for those participating in the production.

Even more desirable in either draft or shooting script format is a copy which belonged to a particular artist.

Those in which the artist wrote their notes is likely the most desirable of any script— particularly if it belonged to a major star who annotated their script as they worked.

These annotated scripts give us even deeper insight into the process— whether they be the notes of an actor writing in the characters motivation, their blocking as given on set by the director— or the way to pronounce a word.

Sometimes these scripts include the entire production schedule break down, or the financials with details down to the cost of hair pins bought at the local five and dime while on location. 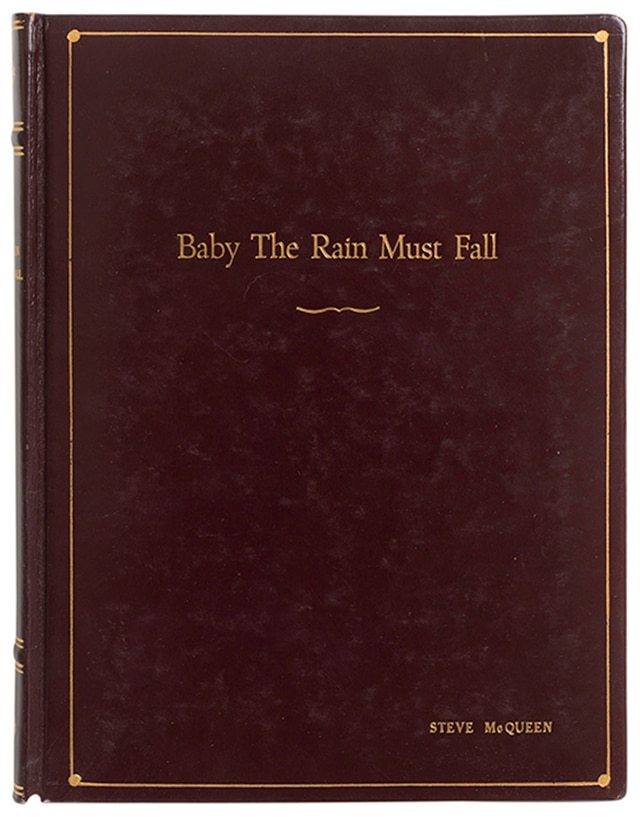 Such is the story behind our offering of Steve McQueen’s very own copy of the script BABY THE RAIN MUST FALL.  This final draft dated August 24, 1963 represents the shooting script— that which McQueen worked from which was mostly filmed. This is evident in that it includes changes pages inserted on different color paper and which are dated throughout Oct. and Nov. 1963. From this it is evident what scenes were changes and added once the production was being filmed.  This is a copy which McQueen chose to have leather bound to be kept in his personal collection.

Signatures on scripts can add value too.  Such is the case with the second draft script of CHINATOWN.  The script itself in any original format is rare in the market, but this draft, used in the production process features the signatures of stars Faye Dunaway and Dianne Ladd. Of great importance are the changes made for the final shooting script of the film, all detailed in our cataloging of the script.

The continuity script, which represents the final film as edited and released, is also extremely collectible.  These were issued in larger quantities and distributed for use in dubbing and for censorship in different territories and to have a record in print of the film’s final cut.

Without a continuity script, it would be impossible to piece together what a lost film would have been like.  Lost films’ photographic stills and artwork provide us with some idea of what has been lost, as in the case of the 1926 film version of THE GREAT GATSBY.

These continuities were often presented to the talent on a film, sometimes in bound form, as David O. Selznick presented to those who worked on GONE WITH THE WIND.  Actors and directors also tended to keep either a copy of a final shooting script or a continuity bound with their name in their private collections.  Sometimes these are offered to the public from their estates.

We hope you will take the opportunity to review WalterFilm’s historically important Film Script Collection and discover a wonderful insight into the movie making process.